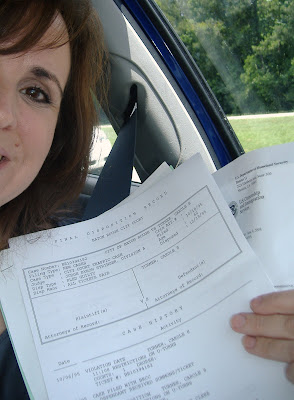 These are the final disposition papers from two of my arrests, one from 1995 and the other from 2000. Both were for unpaid tickets for traffic violations.

I had received notice the other day that in order for our immigration forms for our adoption to be approved, I had to provide the department of Homeland Security with these documents. They explain "why" I had contempt of court charges appear on my federal finger print records.

When I got the call and then the official notification in the mail my first thought was "why didn't I just pay the tickets when I got them?" Yes, they are paid now, all that was cleared up back in 2000. That is what the Dispositions show. BUT I had to be arrested, go to court and pay way more then the original ticket because I just didn't do the whole "responsibility" thing. I used to NEVER keep my license, tags, inspection sticker, or anything up to date and current and I certainly didn't pay traffic tickets. Last month I renewed my drivers license two months before it was due. I have learned my lesson.

Seriously, who did I think I was? Why did I think I should be above the law when the entire rest of the world wasn't? What kind of witness was I by living that way? How Christ like is that?

We do reap what we sow. Today humbled me yet again. Today, waiting at the court house for these papers. I prayed a lot. Me and God talked. I told Him how thankful I was for His mercy and grace. I knew I deserved this, I was just reaping what I had sown many years ago. I asked Him to teach me from this experience.

See, we can't travel to get A if we don't have this immigration clearance. Me having to get these dispositions delays us getting that clearance. Like lets say the agency calls me tomorrow and says that we have a court date for July 1st. If I don't have the immigration clearance back by then,we can't travel to get him and I would have to wait for a later court date. Yes, my actions in 1995 and in 2000 could affect the life of my entire family and delay getting A home. That's hard to take.

28 And we know that in all things God works for the good of those who love him, who have been called according to his purpose. Romans 8:28 (NIV)

Cajun Tiger said…
I like the line, "Me and God talked." Isn't it just amazing that we can actually have a discussion with the creator of the universe! What an awesome God we serve! Oh and I definitely know all about reaping from past mistakes, so good job on learning from the mistakes to hopefully help others not make the same.
6/14/2008