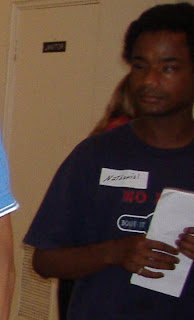 Nathanial is 36 years old but has the mentality of a two year old. He is legally blind, walks with the sweetest short stepping shuffle and just makes you want to talk kindly to him always. When he smiles, his little slats that are his eyes, get even smaller. There aren't many people in the world as sweet natured and special as Nathanial. Nathanial goes in and out of homelessness. He comes to Thrive every Friday, sweeps, mops, whatever is needed and we all love him very much. 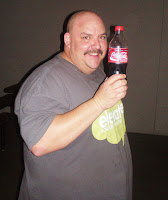 Eric Doucet is a security guy at HPC. He also works with ex offenders. Not too long ago Eric was out looking for one of his ex-offender clients. He knew the guy was now homeless so Eric decided to go look in the expected place; the overpass of North Boulevard. Eric got out of his car an walked toward a group of homeless guys. He asked for the ex offender, they told Eric they didn't know where he was and then they asked Eric for money. Eric told them he didn't have any money. Well they didn't really like that answer and all of them rose up and headed toward him. In that moment Eric started to think that coming alone may not have been the best idea.

Just then from around the wall of the overpass came a small black man. His walk was child like and short stepped, a shuffle of innocents. His eyes were small slats, as if it served no purpose to open them wider. The face of this gentle soul looked right at Eric as it came near, he gently grabbed Eric by the arm and guided him back to his car. He put Eric into the car, shut the door and waved good bye, in a sweet hand-wide-open wave. Then He walked back to his place under the overpass with the other homeless men.

Two weeks later Eric was walking into his office at Winborne. It was Friday and he was arriving just as Friday Thrive was ending. As he opens the door, there he was, that small Angel from the overpass, sweeping the hall of the Dream Center with that familiar short stepped shuffle walk.

"Hey, that's the guy that saved my life under the overpass!" Exclaimed Eric.

Anonymous said…
Such a sweet, God-appointed encounter. He uses us all. Brilliant.
6/22/2008

Lesley said…
Ya know sometimes when I hear certain stories, all I can think of is ... "Wow!! That was totally a God thing." THIS is one of those times... God was at work, no doubt about it!!

Curlz said…
This story is precious ~thankyou. Recently discovered your blog and find your heart inspiring.
6/24/2008