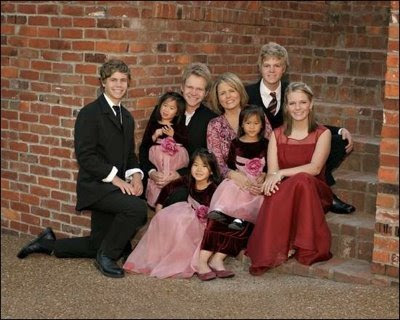 One of contemporary Christian music star Steven Curtis Chapman’s six children was killed this afternoon when she was struck by a car said to be driven by her teenage brother in the driveway of the family’s Williamson County home.

The child, Maria, age 5, was taken by LifeFlight to Vanderbilt Hospital, which confirmed the death, according to Laura McPherson, a spokeswoman for the Tennessee Highway Patrol.

She was hit by an SUV driven by her teenage brother, she said. Police did not give the driver’s name.

The teen was driving a Toyota Land Cruiser down the driveway of the rural home at about 5:30 p.m. and several children were playing in the area, McPherson said. He did not see the 5-year-old in the driveway before the vehicle struck her, she said.


“It appears to be a terrible accident,’’ McPherson said.

Read the rest of the article HERE and PLEASE PRAY for them!!!
Adoption Music

Lesley said…
I have felt so incredibly sad ever since I heard about his tragedy. It seems like no matter what I am trying to do during the day, my thought continually drift back to this amazing family. I am lifting them up to God every time they enter my thoughts. I pray that He provides them with the peace and comfort that only HE can provide. My heart and prayers are with all of them, and especially Maria's brother. I pray that God doesn't allow feelings of guilt (sent by the devil) to consume him. All of our days are numbered by our Father. Life on earth is only a countdown to eternal life in Heaven with our Father.
5/23/2008