May 06, 2008
Karen is one of my all time favorite writers. This little article will give you a taste of her abilities but if you have time, pop on over to her blog and read some more.

I love what she says here.. 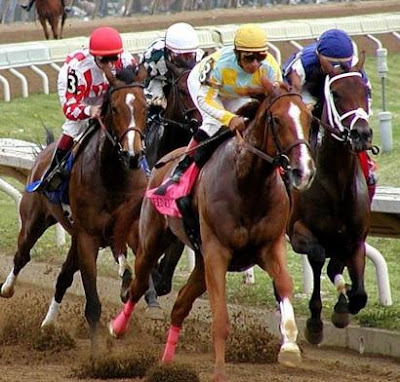 I'm sure most people saw the news this weekend about the Kentucky Derby. If you didn't, Big Brown won, but Eight Belles, a filly (girl), came in second. (She is in the green.) When she finished her race, she slowed down, and then collapsed. Both of her front ankles were broken. She was euthanized immediately right there on the track.
The thing that is ringing in my head about Eight Belles is that she was running with the boys. The big boys. Normally fillies do not compete against the males. Had she won, she would have been the first. Now I'm not going to make some gender statement, but I am impressed that she was doing something that she wasn't really supposed to do. She literally ran the race of her life, and finishing second is incredible. We're always telling Evan to "leave it all on the field." Give it your all. That's what she did, and I have to ask myself- is that what I am doing? Am I running as hard as I can, in pain maybe, but running with everything in me? I don't know what your race is like, but we all need to run like her- joyfully, with everything in us, leaving it all on the field. God bless Eight Belles."
Christianeese Friends