May 20, 2008
I found out a little about where A is from in Ethiopia. He's from the Tigray area, north of Addis Ababbu, the capital city of Ethiopia.

Sometimes when people go to pick up their children from the Foster homes, they get to go meet relatives and people that may have known your child but in our case, it's too far away so we will not be able to.

I tried to look at the area on Google earth, but I didn't see any homes, even hut looking homes, but at least I was able to get this information about the history of his people.

This is just a sample, you can read it all here if you would like.

I found it all very interesting. 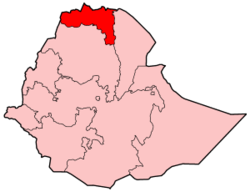 The name Tigray is the name used for this people group in Ethiopia. The Ethiopian province where they live is named Tigray after them. The people are called Tigrinya in Eritrea, so-called after the language they speak.

The name of the language is Tigrinya, which means "the language of the Tigray people." Tigrinya is descended from an ancient Semitic language called Ge'ez. The Coptic Church officially uses the Bible in Ge'ez today, although even most priests do not understand it. 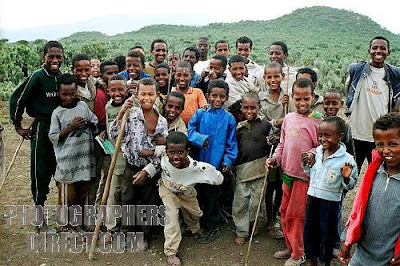 They are generally considered very beautiful people. Among Ethiopians, they are some of the most industrious and determined people.

During the 1985 famine, when Ethiopia filled the American news and volunteers from Live Aid and Southern Baptist missionaries were feeding millions of people, it was a film about famine-stricken Tigray that raised international consciousness. Tigray received almost no aid. The government was trying to break the will of the independent Tigray, so they kept aid workers out of the region.

According to their traditions they trace their roots to Menelik I, the child born of the queen of Sheba and King Solomon.

It is thought that the Sabaean (Sheban) people began to settle on the west coast of the Red Sea, from their home in southern Arabia, about 1000 BC.

The way of life evokes images of Bible times. Camels, donkeys, and sheep are everywhere. Fields are plowed using oxen. The Coptic (Orthodox) Church is a large part of the culture. The church buildings are built on hills. Major celebrations during the year are held around the church, where people gather from villages all around to sing, play games and observe the unique mass of the church, which includes a procession through the church grounds and environs.

Coffee is a very important ceremonial drink. The "coffee ceremony" is common to the Tigrinya and the Amhara. Beans are roasted on the spot, ground and served thick and rich in tiny ceramic cups with no handles. When the beans are roasted to smoking, they are passed around the table, where the smoke becomes a blessing on the diners.

This area is particularly dry and difficult to access, where the population lives off the local agriculture to survive and where intestinal infections are very common, especially amongst children, and are caused by the use of unsafe water (mostly stagnant water).

The Tigray region is in the North of Ethiopia and has a surface area of approx. 61.500sq/km, which corresponds to 5,6% of the whole surface area of the country. There are approx. 5 million inhabitants in Tigray, 85% of which live in rural areas with a 3% growth rate. In Ethiopia, just 22% of the population has access to clean water but in rural areas this percentage drops down to just 11%; only 4 people out of 100 have access to adequate health care facilities.