Skip to main content
October 02, 2007
Meet Paul David Hewson.
He's a decent guy, works hard for his living. Has a wife that he's been married to for 25 years and four kids...all with biblical names.

He grew up in Ireland during
"The Troubles" so he saw and heard a lot, even though he didn't live in the "hot spots" of his country where everything was happening.

Yet if you lived in Ireland during that time, the politics of what was happening affected the entire country anyway, no matter where you lived.

Especially unusual for Paul was that his Mother was Protestant and his Father Catholic. That in itself made for an especially harsh mix during those times as well because what was happening in Ireland was all about religion....though some told me that it was about "land."
I happen to think it was about both.

I came to know of Paul because of two very special events that took place in my own life.
I was going to Northern Ireland with a team of people from America to connect with local Irish people that were doing "Reconciliation" work between Protestant and Catholic young people in a city that had a very troubled past.

In fact, the song "Sunday Bloody Sunday" was written as a result of one horrible event that took place there. That scene was just a couple of blocks away from where I slept each night.

As a result of word getting out that I was going on this trip, my family was approached to work with a group called the "Ulster Project."

They asked us to host a young person coming to America from Northern Ireland into our home for an entire month and participate in events they would have for the month to promote unity amongst the kids that were coming. They were of course...."Catholic and Protestant" young people.

It was a great thing to be involved in and it went along with what we were doing so we said "Yes." As a result of working with that group we learned even more about the people and history of Ireland.

The amazing thing was that 16 kids that came to America for the
Ulster Project being held in our area were from the exact same town I had just gone to with my own team.
This could not have been more "divinely planned." It totally was the "icing on the cake."

Before all this took place, I started to prepare by studying everything I could about Ireland/No. Ireland and the culture.

I read all about the history, I read autobiography's of the people from there.
I watched movies about Ireland..anything I could get my hands on....and I started to listened to the music that came out of Ireland, every type of it....and that is how I came across Paul and his friends.

And as far as Paul goes I've never met him personally.....although I've heard lots of impressive "first hand stories" from people that had encounters with him.

What I've also come to realize is that people who ever they may be, are affected by what they have lived through. By their surroundings.

If they want to they can use those things to make a difference in their world. To change the world. That is .....IF they want to.
This goes for all of us.

Something I saw regarding the Irish is ......they are unbelievable musicians and singers.
Story tellers through song. I met person after person in Ireland that played not just one instrument but several.....entire families were musical. It was like it was in their genes.

Back to Paul, he actually goes by his childhood nickname that was given to him because of his "good voice"..long story short....we all know him by the name "Bono." 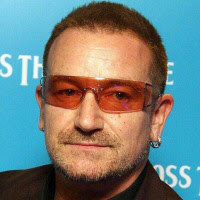 He and his friends formed the band known to you and I as "U2." They have put out some pretty impressive music through the years and have gathered many awards along the way but I don't think they have forgotten where they came from.

Bono is world renowned because he is the lead singer/songwriter of one the greatest rock bands to ever come out of Ireland. Some time ago though.....he told some people that he would "lend himself" his fame basically......to help fight world causes.
And he has done that and done it well really.

I watched him this Spring on C-Span when it televised the "G-8 World Economic Conference" and he could hold his own with every high ranking "World Leader" that was there. He knew his stuff.

Bono has done a lot to bring "world recognition" to what is happening in Africa, Burma, South America, and many other places that have had to deal with injustice, debt, famine HIV/AIDS and a host of other problems.

I think that is because he saw issues first hand in his own country, the injustices that happened with his own countrymen being divided and killing one another.

We all have a story to tell...we all have been influenced, for the good and the bad maybe. We can take those things we have seen and use them as tools.
Tools that can be instruments for change.

I have always believed that "ONE" person could make a difference in this world. Don't be afraid to step out......that one person could be YOU.

You could be the next Bono. I'm not talking fame. I'm talking "lending" yourself to a cause. Basically "you give yourself away."

Does that Sound familiar?
Maybe you can't sing like Bono.....but you DO have a story to tell deep inside you and you can tell it to the world world. Even if you only go on one special trip or host a child in your home for one month.
You CAN impact someone.

agardana said…
Love the post. You preach it sister.