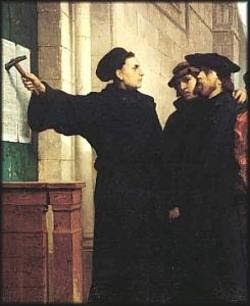 On 31 October 1517, in Saxony (in what is now Germany), Martin Luther nailed his Ninety-Five Theses to the door of the Wittenberg Castle Church and started the Protestant Reformation.

These were points for debate that criticized the Church and the Pope. The most controversial points centered on the practice of selling indulgences and the Church's policy on purgatory. Church beliefs and practices under attack by Protestant reformers included purgatory, particular judgment, devotion to Mary, the intercession of the saints, most of the sacraments, and the authority of the Pope.

Many western Christians were troubled by what they saw as false doctrines and malpractices within the Church, particularly involving the teaching and sale of indulgences. Another major contention was the practice of buying and selling church positions (simony) and the tremendous corruption found at the time within the Church's hierarchy. This corruption was systemic at the time, even reaching the position of the Pope.

Today is a great day in Christian History and in world history so let's celebrate! Happy Reformation Day!!
My issues