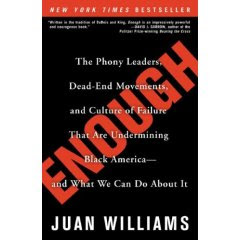 I read an Excerpt from this book today at Christianity Today's web site and to me it is a must read.

I have always really liked Juan Williams. He's liberal but not real far left if that makes any sense.

If you work in the inner city or care about our black brothers and sisters, I think you should read this book. ALSO, if you are a black American, I think this would be a great book for you to read.

Here is part of the interview over at Christianity Today...

..But part of the reason things have changed in black America is that the civil rights movement left behind what it did best. I think what originally empowered the movement was its appeal to conscience and the best of the Judeo-Christian ethic. So you saw preachers like Dr. Martin Luther King and Dr. Ralph Abernathy saying, "If you are a Christian, how can you not see us as children of God, also? How can you not see the Spirit of God within us?"

And that was such a challenge to the white segregationists. It cut through to the heart, and I think that is why so much of the civil rights movement is rooted in the pulpit and in the church. It spoke across racial lines with the idea of "let's all stand together in Christian service to do what is right." That message that called us to reach within ourselves and fulfill God's intent for the world is such inspiring stuff. But all of that shifted in the early '70s when the movement was transformed into primarily a political force. Then it became about certain black leaders getting their "cut of the pie." That was such a different message than "We shall overcome" and "We will stand together because God is on our side."

To start, we've got to deal immediately and urgently with the 25 percent of the black population that lives in poverty. Poverty is self-perpetuating, so we must find ways to prevent the cycle from taking hold of generation after generation. There are people who don't have the will to take advantage of opportunity or can't find a way to get a grip on that first rung on the ladder of upward mobility.

So how do we change this?

In the book, I talk about a government study that concluded if you graduate high school, don't have a child out of wedlock, don't marry until you are employed, and enter and stay in the work force—no matter how small the job—you have an excellent chance of living above the poverty line. I think that's the message we have to convey to young people. You can make it in this country. At the very basic level, you just need to do things that will put you in a position to win. Graduate from high school, and if possible go to college. Stay in the job market. Don't have children before you're ready to care for them. And understand the value of marriage—both in terms of family life and in terms of building wealth and securing a stable standard of living. We need to tell people these basic steps and start talking about how shameful it is to get involved with crime—reintroduce the stigma. Like Cosby said, "They may be building all these jails, but you don't have to go to them."

You mention the church and religion as being a part of the solution as well. Specifically, how do you see churches and people of faith playing a role?

Let's start with Hurricane Katrina. There are still volunteers from every church, every denomination, going down to that Gulf Coast area to help people. Last year, when I was down there, it looked like it was the official vacation spot for many Christian groups. People are going down there to make a difference. In my church, in Washington, we adopted a family of five and made housing available to them on the church property. We gave them the basic necessities, helped them in terms of contacts and getting jobs and all that. And we're continuing to help them now that they've found their own place. This kind of service has been true of churches and religious institutions all across the nation.

The suicide rate and the level of people being emotionally disturbed and upset often spike as a result of natural disasters like Katrina. It's the church that can speak to those different needs and help people cope.

Churches also have a role to play in connecting people across class lines. For example, people who have moved out to the suburbs and who perhaps only come back into their old neighborhoods on Sunday mornings to go to church … Those church members are potential role models and contacts for people who are trapped in those old neighborhoods and need to get out. The notion of a community of faith that can provide a structure of caring and support is a powerful force for helping people. I know, in my own life, I've found this to be true.
Books Christianeese Politics