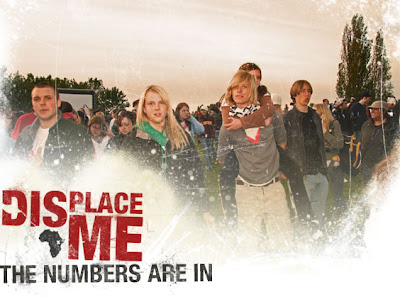 On April 28th, more than 68,000 of you came to be counted. In masses you left your homes and left your comforts to displace yourself for the displaced in Northern Uganda .
Your willingness to sacrifice and your desire to help gives us faith in the future. Because of you, thousands of lives—in both America and Africa —were and will continue to be changed. Thank you for coming together in the name of humanity.
But remember, even though we have already accomplished so much, there is still so much more we can do. Let Displace Me be the beginning rather than the culmination of our efforts. Let this be the spark that starts the fire.

Because of people like you we can say: Every war has an end.

WHAT'S HAPPENING NOW...
The week after Displace Me, we at Invisible Children went to Capitol Hill to talk with our leaders about what the US government can do to help in the peace process in Northern Uganda . We showed them photos and shared stories from Displace Me, and many of them were blown away. We set up more follow-up meetings for early June where we will be doing on camera interviews with some of these Senators discussing what they plan to do to help the kids in Northern Uganda .

The current negotiations in Juba represent the best opportunity to end the war in over twenty years, and securing lasting peace requires urgent action from the U.S. government. Thanks to your efforts at Displace Me, a letter asking President Bush to send a diplomat to the peace talks is sitting on the desks of your members of Congress. To make sure it gets off their desks and into the White House, join Resolve Uganda 's campaign to Dispatch a Diplomat during the week of May 21st, and ask your representatives to sign on. To find out how, go to resolveuganda.org.

STAY INVOLVED...
Pre-Buy the Black BraceletPre-order the Black is for Sunday Displacement Bracelet today. Your bracelet will be packaged with a DVD that includes a story of a displaced boy named Sunday, as well as exclusive footage from Displace Me.
Buy Clean Water through Charity:WaterPurchase a virtual bottle of Charity Water and help build wells in the Displaced Camps in Northern Uganda . Your money will provide thousands with access to clean water.

Speak to Your Leaders Continue to use your voice for change. Speak to your leaders through the Enough Project to end genocide and mass atrocities. Visit EnoughProject.org and write your state and national representatives about the situation in Northern Uganda .

Keep Checking the Displace Me WebsiteOver the next month, we’ll be updating the website with more photos and footage from the night of. Keep checking back to see the political follow-up in Washington and how your leaders are responding to your actions.

CHECK OUT INVISIBLE CHILDREN THIS MONTH...
Veronica MarsThis Tuesday May 15th (9/8c), watch the Veronica Mars episode all about Uganda ’s invisible children. After the episode hear stars Kristen Bell, Ryan Hansen, and Jason Dohring offer their two cents about why the American population needs to get involved.

Pete WentzFall Out Boy front man Pete Wentz is doing his part for the people in Northern Uganda . Check out MTV.com to read how Wentz puts his money where his mouth is.