What can be done about Blood Diamonds? 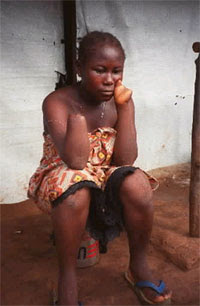 Fourteen-year-old Adaman Kamara lost both her hands to rebels during Sierra Leone's civil war, which was funded, in part, by conflict diamonds in the 1990s. Although that war is over, diamonds continue to fund conflicts in Africa; the diamond industry and governments must do more to protect the legitimate diamond trade.

“Diamonds are a $60 billion a year business, and even if only one percent of the retail market includes gems that fuel conflicts in African nations, that's $600 million worth of cheap assault rifles and rocket launchers killing thousands of people every year," says Rory Anderson, World Vision’s senior policy advisor for Africa and an expert on the illegal diamond trade. "It's unconscionable."

Get Involved
Ask jewelers about their policies on conflict diamonds and for clarification about whether their diamonds are mined and sold legitimately.

--Pray that the diamond industry and governments do more to protect the legitimate diamond trade and bring to a halt the horrific practice of "conflict diamonds."

--Contact Congress. Ask our U.S. government leaders to better enforce the diamond trade law so that conflict diamonds do not continue to fund wars in African countries, like the Democratic Republic of the Congo.