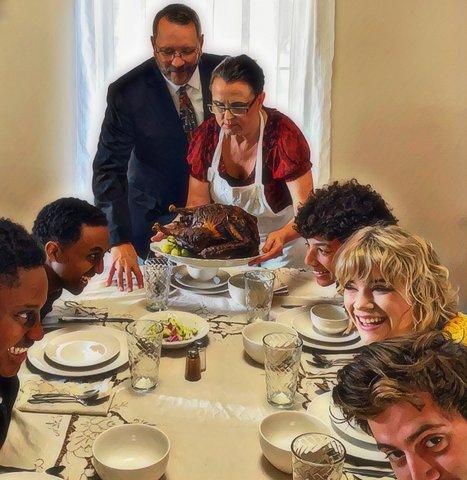 I haven’t written one of these Year End letters in quite a while but since we are rounding out a decade I figured what the heck, let’s go Old School. Well, not my Old School that would be me writing this by hand with my horrific left handed cursive, which kids now don’t even know how to do anymore which is crazy, script is beautiful, unless of course you are me then its chicken scratch. Anyway, got off track, Year End letter here we go.

January saw the engine on our vehicle, Vandolf the Grey, blowing a rod and us getting a new car we named Optimus Prima Donna. February 5th a man slammed into the back of it while I sat at a red light minding my own business. This caused me to get Frozen Shoulder it also caused me to Get Gordon (he’s a famous personal injury attorney here in Louisiana) we had to Get Gordon (that’s his slogan) because the guy who hit me was driving a Hertz rental car and they wouldn’t call us back concerning coverage for damages or my injury, wouldn’t issue a claim #, nothing for over a week. I sadly knew how s#!tty Hertz was from a previous run in with a man who passed out behind the wheel and ran into me in a Hertz rental car just four months earlier, they NEVER covered that and if you Google Hertz coverage for accidents you will see there should be a class action law suit, Hertz is that bad. So we had no choice but to get a lawyer. I had surgery on my shoulder in August and was in physical therapy up until October. I am still in litigation but the physical pain is finally better.

That’s how 2019 started. Oh but it gets even better (in the worst way). At the end of February Abel decides to steal Optimus Prima Donna, run from the cops when they find him and crash our already wrecked car into someone’s garage apartment. Yep. So 2019 was the first time I visited one of my children in jail. I walked into a small concrete room with two sided windowed desks with phones on each side, Abel walked in on the other side dressed in all orange. We grinned at each other, both remembering all the times I’d said “I don’t care that you don’t want me to be your mom, no matter where you are, even if it’s in jail, I’ll be the one on the other side of that glass coming to visit you, picking up that phone” and there we were.

He went from jail to YCP in Carville LA in May, thrived there, graduated high school from there and decided to go into the army BUT we hit a snag, found out his adoption was never completed and he was now here illegally, could be deported, especially under T-dump who’s administration has been deporting adopted kids left and right. SO we had to spend thousands of dollars to complete an adoption that we thought was done ten years ago. AND then he changes his mind about going into the military, which works out because the hearing loss he has in his right ear would prevent him from being able to enlist anyway. At least he’s legal now and can’t be deported…hopefully.

While all that lovely drama’s going on I was trying to hold down a job, now with Frozen Shoulder in my left arm, which I write with, do everything with, in constant pain and with VERY restricted range of motion. I was also trying not to lose my frickin’ mind because Abel’s stuff triggered dormant stuff I’d never dealt with. Dean was battling his Diabetes; Evangeline was randomly not waking up so I had to call 911 from Baton Rouge to go to her house in New Orleans where she’d wake up with an IV of Glucose in her arm. I was taking Steele to see Cardiologist because he was complaining of chest pains and heart palpitations, telling me he couldn’t breathe sometime. We got him on a heart and blood pressure monitor cuz’ he was having so many episodes which turned out to be panic attacks. Finally I went to the doctor, he tells me I’m depressed, (YA THIINK?) puts me on some meds, Dean took up Kayak fishing and got on an Insulin pump, I started painting again, reading some books that helped me deal with my shit, and took up cussing for recreation…ahhh….I could breathe again!

Now, things have leveled off. Abel is doing well. He’s working in the warehouse at Mattress Direct and hoping to get a job at Coke when he turns 18 in March. Steele hasn’t had a panic attack in several months and He loves to skateboard, which helps him. Evangeline has her blood sugars under better control, she’s back on an insulin pump so no more 911 calls THANK GOD. Her boyfriend Nick looks out for her too and we love him.

As you can imagine, we’re in counseling. I mean, if all THAT doesn’t send you to a therapist nothing will. The boys and I have gone to see one on and off throughout our lives, now Dean has his own therapist as well. I saw a tweet the other day, don’t remember who it was but it said something like “If I win the lottery, paying for all the homies to get therapy.” And I felt that. Amen! I’m keeping a journal of all I’m discovering and processing in therapy so I won’t burden you with it here but it’s good, not good in a feels good way but good like needed surgery. I highly recommend it. Especially if you freak out on people over little things, cry hysterically at commercials but not at funerals, stay around people that make you feel awful about yourself, go get some therapy. Yes, I’m an expert already, do you not know me?

Anyway, gently steering away from the heavy, the year had some very bright spots here are a few…Being on the Louisiana Women’s Incarceration Task Force and being asked to be the Chair of the Health and Mental Health Sub Committee. So grateful to Natalie Laborde for nominating me and to Governor Edwards for the appointment (Thank God he won reelection too).We had our last meeting at the beginning of December after working on this for over a year and a half. I learned so much and it was wonderful and gave me hope being a part of a bipartisan and diverse group of women who came together to make life better for the Incarcerated Women of our state. Since the first time we went around the room and made our introductions at the very first meeting, all the other appointees had fancy job titles, were judges, wardens or politicians, so their introductions were very impressive. When it was my turn I always wanted to be funny and say, “I was appointed because I’ve watched every episode of Orange is the New Black” but I never said it. At this last meeting when Natalie said “since we have visitors with us today, why don’t we have the task force members introduce themselves...” I knew it was my last chance, I said it, and I got the laugh, one person even said “that’s funny” Timing is everything.

I participated for the first time in Free Mom Hugs during the New Orleans Pride Parade. If you aren’t familiar with Free Mom Hugs, look it up. (freemomhugs.org) I made my own shirt, complete with the word, “hugs” spelled wrong, yes, that’s right, I spelled hugs wrong because I’m a writer and I don’t know that hugs only has one g. I went by myself and met up with the New Orleans Free Mom Hugs group. It was amazing. Hug your gay kids, affirm them, that is what we did and it was Jesus.

I won a trip to see SNL! Yes, Saturday Night Live! I don’t want to be cheesy but God worked everything out perfectly for us to go. We had enough points on our credit card for a free hotel right in Time Square, we got round trip plane tickets from N.O. to NYC for $175 each! Evangeline went with me, it was just perfect. We walked 13 miles the first day and 9.5 the next. We slept a total of 10 hours in two days. I can’t express to you how insanely great it was to sit and watch SNL. It was a dream come true. You can read all about our trip at Whirlwind Weekend In NYC to See SNL. It’s a really great story.

Those are a few bright spots from this last year, those plus talks with my Steele, his wit, his hugs, they continue to be the best of life. The regular trips to New Orleans to do Karaoke at Cat’s Meow when Evangeline was working. She’s such a great Emcee, if you haven’t been, you should go. Also the few times I was able to record the Geek Parlor this year, that’s my YouTube show, it’s great, you should check it out and subscribe to my channel. The dinners and drinks with friends, LSU tailgates, seeing Dwight Yoakum, got to check that off the Bucket List and Yola, met her and got a signed shirt! The Halloween party weekend with Donna was EPIC, She dressed as Sexy John Snow, I was Arya and we killed it as usual. So much good, so much fun, lots of light and love in a dark year. Did I mention I went to SNL? Still pinching myself.

I’ve been rambling on for a bit now so I’ll leave you with a word about the inspiration for the Christmas card I sent this year, that I talk about in my next post, The Making of A Norman Fu%#ing Rockwell Christmas Card, it was inspired by Lana Del Rey’s (now Grammy nominated) album, Norman Fu#%ing Rockwell. If you haven’t listened to it, you should. It’s damn near perfect. These lyrics from her song, “Hope is a Dangerous Thing” sums up 2019 and how I feel going into 2020 on this ride called life… Hope is a dangerous thing for a woman like me to have but I have it, Yeah, I have it, Yeah, I have it, I have. Simple, direct, to the point. Like me. Have a great 2020 everyone!!
Email Post
Labels: 2019 family Finger Nail Droppings mental health writing