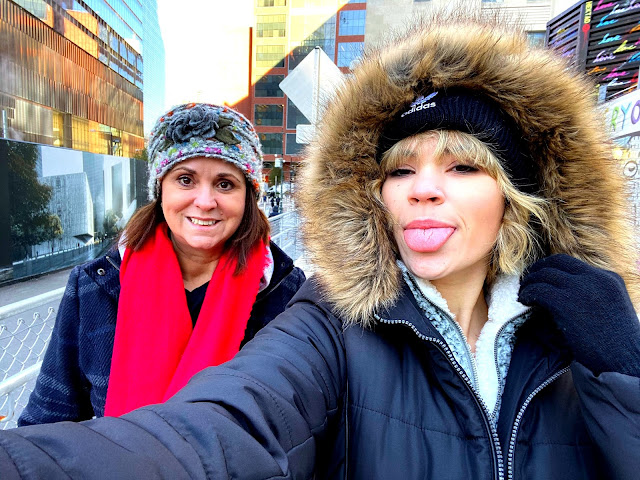 So when we got back home Sunday I went to bed at 2:30 pm and didn't wake up until 5 am Monday morning, No joke. I was exhausted! We'd only slept 10 hours in two days but man did we do some stuff!

Here's my hot take on our whirlwind trip to NYC to watch SNL..

Next time, bring serious walking shoes. Like, walking shoes for the concrete jungle. The first day we walked over 13 miles, all on concrete. Second day we walked almost 10. My right knee is killing me, my shins, my calves and I got some crazy bruise, sore spot on the top of my left foot from those damn boots. I wore my prescribed inserts, and the boots are generally super comfortable for walking around but I was kicking myself for not forgoing fashion and just wearing my hiking boots or Nike’s.

But baby we got dem steps in yo!!

Friday the crowds were tolerable, Saturday was apocalyptic. It was like Disney on Crack, Meth and Hay-Ron (that’s southern for Heroin) and SO F-ing cold!! 30 - 34 degrees. That was the HIGH!

On Friday Evangeline's friend Miles, who lives in NYC, met up with us for a few hours. He took us by Trump Tower so I could Flip Trump off. That was definitely a highlight. We were walking and this group of people were standing there taking pictures in front of it so we had to wait, others were watching people take pictures, when it was my turn and I posed with the double bird fingers up, the crowd separated like the parting of the red sea, and all these people are just staring at me, some ladies are like "that's more like it!" and others start clapping and cheering. It was great.

After that history making photo op we had drinks at the Plaza Hotel Champagne Bar then Evangeline took me to a sex museum. Yes, you read that right, a sex museum. Needless to say, it wasn't my thing.

Among the other highlights, I got to take a picture with a Banksy that's on a wall on the Upper West side, we road the subway everywhere, ate street pizza, bumped into five million people while walking, took pictures with the Naked Cowboy, road the Staten Island Ferry to see the Statue of Liberty, visited the 911 memorials, went to Wall Street and got a pic of the Fearless Girl, and I had a full on melt down in a Corner Deli, complete with crying, when Evangeline and I got separated due to a misunderstanding and a GPS that kept freezing up.

Then, when my knee's were screaming, my feet barking, I was freezing, hungry, exhausted, I receive a Venmo notification that Courtney and Miranda sent us $100 for dinner! It was only 2pm but we headed straight for Little Spain, Jose Andres place. It's several different restaurants together in Hudson Yard. I love him because what he did, feeding the people of Puerto Rico after the hurricane and I know him through Anthony Bourdain's show, he was one of Bourdain's best friends, so I love him because I loved Anthony :-) The food was deliciosa! The wine was magic in my mouth and I had white asparagus for the first time since returning from Spain. Everything about the dining experience was perfect.

Some random observations, comparisons to New Orleans, which I know is like setting a lime next to a watermelon but I can't help it. I've always thought New Orleans must be like a little New York. Now that I've gotten a nibble of the big apple, I know how very different they are. Not better or worse, just different...

We noticed a lack of music. All these blocks of entertainment, shops, bars, restaurants, nightlife and no music. We are use to New Orleans where music comes waving out of every place you pass. It was very strange to be in the most commercialized place in the world, entertainment everywhere, the home of M-TV, (not like they have anything to do with music anymore) and you hear no music. When you're walking around the French Quarter in New Orleans everyone is Up or wanting to be Up, they are excited, usually drunk or looking to get drunk, looking to party, have fun. So the vibe is one of "let's have a good time" the music everywhere adds to and feeds that vibe. I definitely missed that. Maybe it would be too much noise?


Which leads me to car horns. I deeply appreciate that people in NYC get on their car horns. If you blow your horn in the south you feel bad or others feel bad for you, or try to make you feel bad. We all want to honk, most of us just don’t. In NYC every driver is always in the “move your ass!” head-space and will not hesitate to use their horn to give you the What For.

Which leads me to the realness. In NYC people are direct and real, not rude just “it is what it is”. I love that, I SO appreciate that an wish we had more of that here. In the south we have so much cotton candy fluff in our interactions, not in NYC.

But let's talk about SNL,

When we got to 30 Rock I saw Ego Nwodin strolling in just talking on her cell. Then later Alex Mofat and Beck Bennett came rushing by, running into the elevator. Then, Al Sharpton walked out! Totally random right?

Watching the dress rehearsal of SNL was like watching the best show ever. We were really high up, away from the stages but the entire studio is small so being far away was still within eye contact of the person on stage. Michael Che came out first and did a little bit of funny stuff, some interaction with the audience and told us all about what to expect. We got to see two hours and around ten minutes of Weekend Update because the dress rehearsal is where they decide which skits and jokes they will cut from the live show. I was a huge Mad Men fan so I couldn't believe it when John Ham walked out for the opener. Harry Styles was so funny! He was so relaxed and a natural and he sounded amazing. The coolest part was watching the set up and between scenes. There was this lady that her job was to grab Harry as soon as they said cut and run him off to change. If you watched the episode you saw that he was in pretty much every skit and he wore wigs in almost all of them. She had to get him back to hair and make up, get him changed, get wig off, new wig on, all in a matter of minutes and she did it. She was like my age or so and She would grab his hand and run like a Bee line. It was nuts. I want her job! The entire operation runs like a well oiled machine which I would think so since it's been on since the 70's.

I still can't believe I won tickets to SNL and I went.

Thank you to everyone who helped make this happen.

Thank you to Evangeline for going with me, walking all those miles and navigating the NYC Subway system for us. You're a great travel partner.

Now, where to next?