When You Can't Be Me, Be She 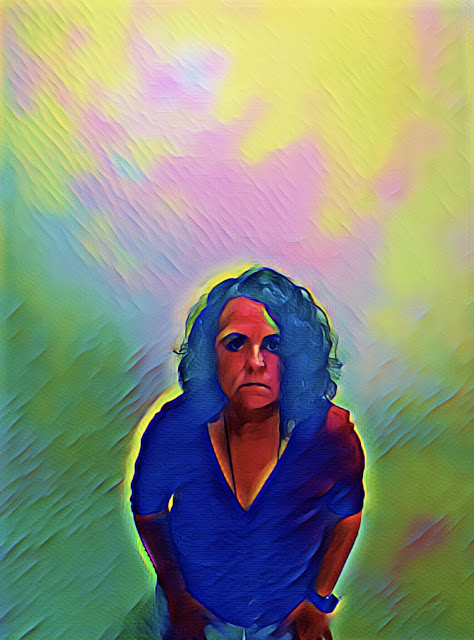 She grabbed at her neck and gulped, inhaled loudly, "I don't know what's happening, "UHHH" she inhaled loudly again, almost seizure like. She couldn't stop gasping. She felt light headed and crazy. Someone in the room said "Call 911!" someone else said "She's having a panic attack." She kept gasping and slapping her chest which felt flat and heavy. She fell into the chair and started to wail, a cry from the depth of her soul. "Get Alison!" She heard another person say. Allison was a nurse who happen to be at her office conducting a CPR class in the conference room for people not affiliate with her employer. Allison and another nurse were suddenly standing over her, and so was her co worker, Nancy. They put a cool rag on her forehead, spoke calmly too her, she doesn't remember much else, it was as if it was happening to someone else. She started to calm down slowly. Her brain felt crazy for several hours after. She had never had a panic attack before. She was thankful for Nancy, Allison and the other nurse who help her.

Fear, trauma, sadness, the body can only take so much.

But she dare not speak of what ailed her, it was too much and she dare not even hint of it publicly, the vultures would pounce. It's better to send what hurts away and then write a lavish blog post about how it was now someone else who would be Joshua, say how she was Moses and someone else gets to deliver into the promise land. Giving up is best, cheaper for sure and she would get to be an online hero, start a Listen to Your Mother seminar, and be famous instead of doing the hard work. The fucking impossible, daily, draining, hard work.

I think she wants to punch someone. She may need therapy.

Walking, her husband, sister, an Esther and a Lolli.

This life is hills and valleys and plateaus and mountains where yes, there are chateaus with fire places where you can rest for a spell but there are also grand cannons that look beautiful but if you get lost in them without life sustaining supplies you will die. There are steep rocky cliffs you can fall off and caverns so deep and caves with steaming hot springs that make like a hot tub and he's John Snow and she's Egrit and she's all like "I don't want to ever leave this cave John Snow" because she knows that out there, on that path is the war, the war of life, the one they choose and the one that chose them and walking that path is hard right now, but it's not always, sometimes it's fun and frivolous and terrifying and awful adventurous and sometimes it's too much and you have a panic attack but it's the path they are on together and they can't stay in that cave forever, out there is the life they are living, damn it!

And sometimes she goes shopping for shiny platform shoes, has a dirty gin martini (you don't shake Gin! What are you crazy? Chemistry!) and she writes, her characters tell her all about their lives, she listens and tells their stories as best she can. She is writing more these days, perhaps because they take her away for a bit and that is good.

So she must focus on the good, there is so much good, much to be thankful for and much is improved, the sun is always rising again.

Oh and medication, she is REALLY thankful for the medication.
Finger Nail Droppings My issues