Time is Not on My Side

September 25, 2017
I need to finish my book. I sit down and write a little then I get overwhelmed by how much still needs to be written so I get discouraged, then distracted by social media, then next thing you know there's something else that needs to be done and then I'm not writing anymore for that day. Meanwhile the characters are bugging the crap out of me wanting to be written but I'm too busy worrying that I'm a terrible writer who has no business thinking she could write a great story and should have made better grades in English class so I wouldn't break every grammatical rule when trying to write. My insecurities get the best of me and everyday is more lost time.

I started reading To Kill a Mocking Bird to the boys. It was Abel's summer reading assignment, which he never read so now we are playing catch up. He hates to read but I like to and I think this is helping him and me. I read a chapter a night, we discuss what's happening, go over words they don't know the meaning of, and I explain what sentences and phrases mean. Older books are very hard for kids to understand because no one talks or writes that way anymore, which is why it's better for me to read it aloud to them.

It also helps me to write better. Nothing helps me more than reading good writing.

I think Steele may be a writer, he is already showing signs that his brain works that way. He's such a funny kid. He comes in at night and lays in bed with me to watch The Rachael Maddow Show. He asks questions and yesterday he was reading my Time Magazine. He told me yesterday that some kids were saying the world was ending on Saturday. They showed him a "news" segment about it on the Internet. I told them before, several times really, that they could find a video "proving" anything. I've taught them to question anything and everything they see or read on the Internet...could be the Russians! He said he told them that was not true but one girl said it was in the bible so that's what made him kind of concerned :-) I told him all the times in my life that the world was ending "according to the bible" which was never the case obviously.

What a crazy world we live in now where we have to teach our kids the intricacies of finding truth in the sea of B.S. bombarding them all day everyday through social media, YouTube and even normal Google searches can bring up some seriously crazy stuff.

Time is not on our countries side though either.
Trump added that if fans would "leave the stadium" when players kneel in protest during the national anthem, "I guarantee, things will stop."
Trump said NFL owners should respond to the players by saying, "Get that son of a bitch off the field right now, he's fired. He's fired!"
When Trump stood on stage at a rally in Alabama and said that about NFL players who protest racial injustice by taking a knee I knew it was time to show solidarity with those patriotic Americans expressing their rights as Americans. He knew exactly what he was doing by saying this there, in a state known for its racism, he was inciting his base against those of us who dare to speak out against his racism, as he likes to do a lot.

Steve Miller was wrong, Time is not slipping into the future, time is being sucked into the past and we are squandering our place in history while evil prevails.

I am not ready to run for office, I don't have a thick enough skin and I'm not in an area of the country that thinks as I do about these issues but I have to do something, I have to at least try. I need to learn how to react in love even when I'm angry and afraid. I need to stay off social media, it feeds dispair and it keeps me from finishing my book.

I have to stop living in regret and negativity, I have to continue working out so I get stronger and feel better, I have to remember to always stop and smell the roses, read more, write more, listen more, love more. 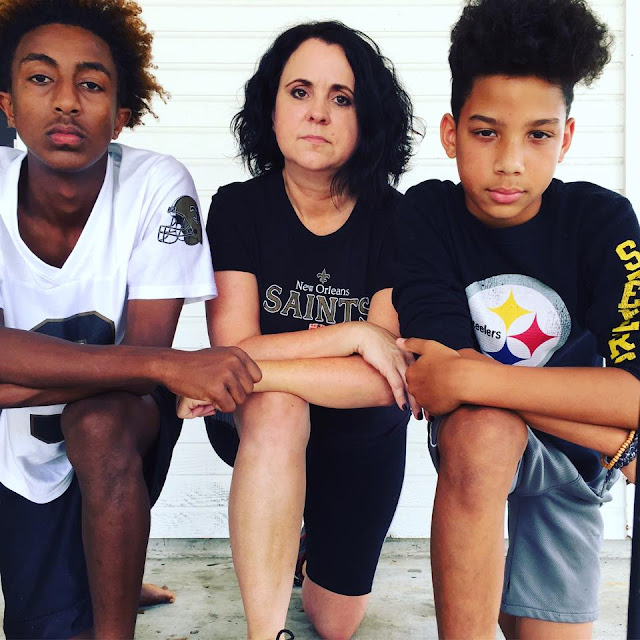