Welcome to My World

June 30, 2017
A couple of weeks back I went to the Anytime Fitness in Prairieville. There are 5 TVs in front of the treadmills there, one of them was on FOX news, the others were on generic shows like What Not to Wear and such. I had put the TV in front of me on Cutest Kittens, I was watching Eddie the Eagle on my phone but it's nice to look up and see some cute kittens or something pleasant, you know what I mean?

I was hunkered down for my 2 hours on the tread mill watching Cutest Kittens and Eddie the Eagle when suddenly I look up to see a man standing in front of my treadmill, remote in hand, turning the TV in front of me to FOX news! I then noticed it was the current pastor of my former church! I immediately looked down, I didn't want to make eye contact and have that awkwardness. He walked behind me and got on a machine that was literally 2 feet from the back of the treadmill I was on! I know he saw me. I know he frickin' saw me when he walked up and turned Cutest Kittens to FOX news, when there was already a TV he could see on FOX news!

On weekday mornings I arrive at my Anytime Fitness (the one on Highland, right by my work) around 5:15am 4 days a week. Every morning for over a year there has been at least one TV on FOX news, usually more than one and none are ever on CNN. That is until I come in. I take my "Nevertheless She Persisted" shirt wearing self up to the TVs, grab a remote, and turn the TV in front of me to CNN.

Today when I walked in there were 2 TVs turned to FOX news per usual. I got on the treadmill away from those TVs and I turned the one in front of me to CNN. Well wouldn't you know it, a man walked up to the TV and turned it to frickin' FOX news!! There were already 2 TVs on FOX! But no that wasn't enough for him I guess, he had to turn another one to FOX. And those 2 TVs that were already on FOX weren't too far away for him to see. Him and his friends were on bikes in the back of the room where all 5 TVs are clearly visible. I guess he didn't want a channel that offers another view of the news to even be playing in his presence.

I took this picture as I was walking to the bathroom to show you the 3 frickin' TVs on FOX! 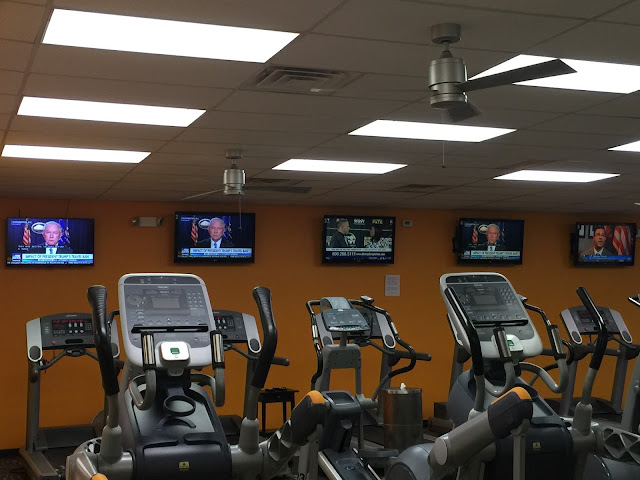 One night Dean and I decided to go check out the new TJ Ribs in Priarieville. When we arrived I noticed that 6 of their 15 TVs were on FOX news. The others were on sports channels. I immediately got out my cell phone and sent a Facebook message to TJ Ribs.

"Is there any way that at least 1 of the 15 TVs here at the new Prairieville Location could be put on CNN since 6 are on FOX news?"

They replied quickly, "Yes, just ask the manager to change one for you."

Within a few minutes I saw the 6 TVs that had been on FOX news, changed to a blank screen.

I replied, "Looks like they are changing all of them but it's not like I want to watch CNN, I just think having 6 TVs on FOX is a little much and having one on CNN would be 'fair and balanced'."

After that all of the TVs were changed to a sports channel, like TVs at TJ Ribs have shown since the beginning of time.


I understand that I live in a highly conservative state but there is ZERO balance going on here. If 2 TVs are on FOX news in an establishment you can bet I will make it know that at least one TV should be put on CNN.

No wonder this area is so Far Right programed, we can't even eat ribs without state ran TV telling us how every news organization is "fake news" but them. And don't give me the "well you only watch liberal media so you can't say anything about balance." No, I always have to watch frickin' FOX news! See above examples!