Midlife Crisis noun
1. a period of psychological stress occurring in middle age, thought to be triggered by a physical, occupational, or domestic event, as menopause, diminution of physical prowess, job loss, or departure of children from the home.

I'm in a midlife crisis and I'm reacting accordingly. I take no shame in that pronouncement.  I embrace it.

A crisis triggers a physical response, fight or flight. I chose both.

I THINK I'm past the Menopause, THINK is the key word here. I had my hysterectomy at 41 and you can ask my family and friends, I have definitely been in menopause for the last few years, but I feel like I'm past it now. I'm much calmer now, not having hot flashes every two seconds, and I just feel less crazy.

I am turning 50 on August 10th and I decided about a year ago that 50 would not be a downward turn rather it would be a crisis that made me say "Oh shit! I better get going!"

So, I've already put some huge things in motion.

First, in August my sister and I will be walking to first part of the Camino De Santiago in France and Spain. Yep, you read correctly, I am doing a walk. If you don't know what the Camino is, here's a link Camino de Santiago

Back in 2011, after I watched the move The Way, I decided I would like to walk it "one day".  Last year when I went to my sister's Steam Punk 50th birthday party (best party EVER btw) I decided I wanted to do something big for my 50th also.

Dean told me about a coworker of his, who told him that his wife and her sister take an international trip every year on her birthday. That made me think "What if Donna and I walked to Camino for my 50th?" I asked her, she said yes but she didn't think I was serious until I called her with incredibly cheap round trip flights to Spain.

I've been training since last summer.

We will be walking for about 6-10 hours a day for 12 days starting in France and walking through Spain and I can’t wait! (The whole Camino takes a month to walk but we are only going for two weeks so we will walk the first half)

Yes, so unlike me I know, going on a walk, roughing it in Spain that is just so "Midlife Crisis".

But that's not all.

A year ago I started to explore running for state office.

Back up, really when I was seven I told my dad I wanted to be a politician, he replied, "no you don't" but since then I have had a love/hate relationship with politics. You all know this, not like I'm telling you anything new.

I met a few dead ends in my search for training on how to run for office but a couple of months ago I finally connected with someone who could point me in the right direction. 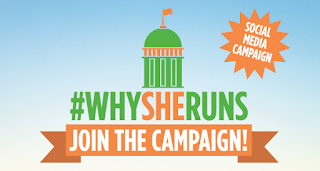 In April I will start interning at the state capital one day a week for this friend. Yesterday I attended my first Emerge Louisiana information session. In January I am hoping to start an official training class with Emerge so I can be ready to run in 2019.

I know, I know,”What the hell? You are SO not a politician", I hear you but the one plus about Trump being president is that it proves ANY idiot can run for office and maybe, just maybe, they can win.
I am any idiot :-)

"I'm an activist who has to learn how to be a politician".

Is what told my friend after a few discussions about my confrontational and opinionated online presence.

So running for office will definitely be an interesting adventure.

I feel like I have to at least try.

I have to try to walk the Camino and I have to run for elected office. I certainly may fail at both, but I am going to try anyway.

So, I am owning this Midlife Crisis because it's mine. I get to shape it. Crisis makes us reevaluate. Makes us see what is important. I refuse to go downhill, I haven't peeked, no sir, I am just beginning.

Like my hero's Tolkien and Lewis who were both in their 50s when the published their greatest works, I plan to publish my book and walk the Camino and run for office 'cuz I'm owning my midlife crisis, it isn’t owning me!
49 Camino De Santiago Finger Nail Droppings My issues Politics