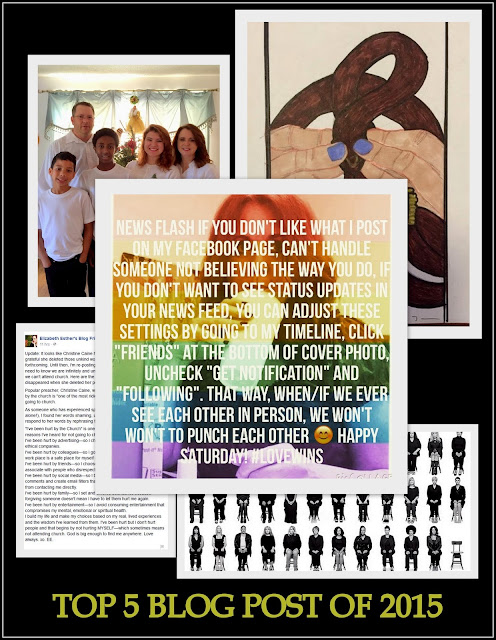 Blogging is dying. Mine has certainly slowed to only a few post a month but it's not dead and I have no plans to kill it.

There may be fewer post but that doesn't mean I didn't see some excitement this year.


Except, the blog post that received the most traffic is not on this list. It was THIS ONE which I had to take down because I had crazy people I didn't know commenting on what a terrible mother I was for "shaming" my child by making him wear ugly shoes to school as punishment. They also freaked out and called me racist for saying he liked to hide in dark places since he's black and people can't see him. That post was viewed by over 800 people and I think half of them wanted me thrown in jail for child abuse. So I had to take it down for my sanity's sake. I've put it back up for this year end recap, hoping that I'm now off of the vigilantly parent police radar...maybe.

Of course the other huge post of 2015 on here and on my Facebook feed was my Love Wins posts. Lord have mercy that stuff got crazy. Ain't nothing worse in the Republichristian south than an outspoken, gay affirming, pro marriage equality, former lay church leader. People lost their frickin minds when I dared to vocalize my support for my gay friends. I mean they really lost it. It was kinda funny actually.

The other top post were about Rape, a vivid dream I had about holding a snake, and when church hurts.

I'd like to say thanks to you for reading my blog and for keeping it alive. I appreciate everyone who takes the time to come here and get to know me a little more, and my family, with each post you read. My children LOVE how much I talk about them on here (sarcasm) Why just last night we were hanging out with Courtney, Miranda and Alex Miller discussing my blog and Evangeline said it and Alex tweeted it... 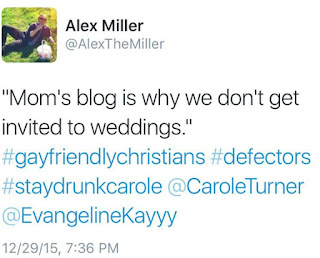