September 01, 2015
While in New Orleans last month at Pat O'Brien's, my friend Jennifer and I noticed that at this famous New Orleans party-visit-must-stop, all of the servers except two were black men in white shirts and bow ties. They served all of us as if we were still in the old plantation days with all the white people laughing and drinking while the black folk served them. Of course it's different because they now make an income from serving people but it was just unsettling. It felt like part of the "southern feel" of a historical establishment such as Pat O's, is this dynamic and we didn't like it.

Today I went into a restaurant I had never gone to before right by my work. Four cute little white girls worked the front counter and two black men and one black lady worked in the kitchen. This place also sold bumper stickers that read, "I Believe in God, Guns and Gumbo" and on the wall behind the counter there was a sign that said "Thank you for carrying your gun today. 10% discount" That's when I was wishing I had one of the boys pellet guns, cuz' I sure could have used an extra 10% off my Shrimp etouffee, which was delicious by the way. (that last line rhymed :-)

I think here in the south we feel like we all have our "places". I see black people decide early on to follow this or that path, the paths decided for them by this post-slavery society that tells them what they are good at and what they are not. And we as white people, we seem to consider them for only those positions until we are forced to see them as more than what has historically been where we and even they, thought they worked best. 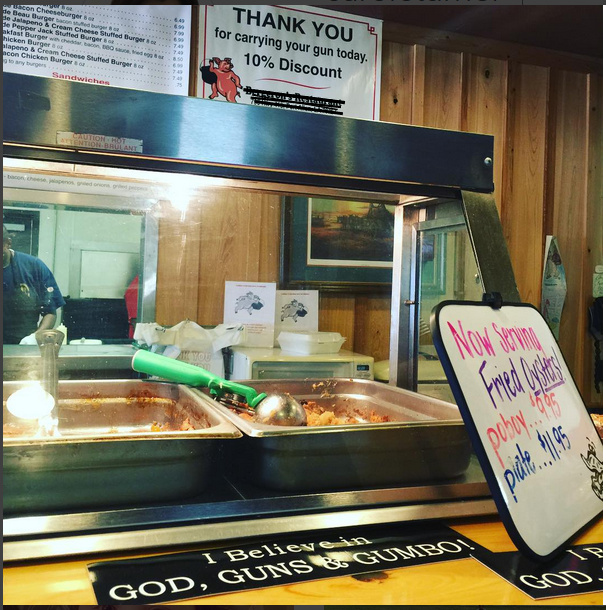 I know this is harsh and I'm making a broad generalization but I'm only stating my observations from a life time of living only in the south. This is what I see.

I think the cure for this deep seated, often times unrecognized racism is for everyone, not just white people and not just black people, but everyone to work hard at not pigeon holding ourselves or each other to certain lots in life. I say "work hard" because it is work to not think and act the way we do.

As Kevin Costner said in the movie Black and White, it's not our first thought that matters but it's the second and third and so on, it's taking our first thought which is jaded by prejudice and status-quo, and then thinking "no wait, maybe that's not right, let me rethink that."

That is the only way we will see real progress, dealing honestly with how we see each other and then working to see another way.

And I want to interject something here as a mother or black boys and as the mother of a young adult girl. What we teach our children to believe about themselves has everything to do with what lot in life they will take. Will they let society stick them in their designated area or will they break out of line and say "No, you don't get to decided this for me!"

The world is changing, and we all get to decide if it changes for the better for all of us or just a few of us. We have to work together.
Feminism Race