August 19, 2015
You may be thinking, "Hasn't this subject been exhausted on her blog?" And yes, I've blogged my exit from church pretty thoroughly.

But yesterday this lit my fire... 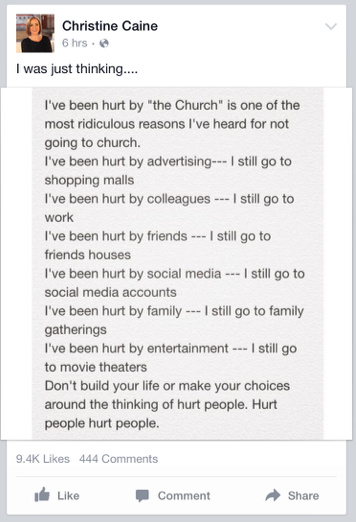 Notice how many likes she got on that post.

Christine Caine is without a doubt the leading female preacher of our time. Her reach crosses denominational lines and she's considered a huge draw for any conference, more so even than most male preachers. SO when someone of her caliber in the church post's something on social media it is purposeful, she knows her influence and is using it to relay a message.

The last line of her post "hurting people hurt people." is the broad stroke cliche used to write off hurting people. I can't tell you how many times I've heard a preacher say this to dismiss a hurting person who leaves, accuses or questions leadership in the church.That and "She's just bitter." both wipe the slate clean and everyone can move along. It's a way for them to close the conversation and saying "next subject please."

I guess Christine Caine received some negative feedback along with those 9.4k likes because then this happened... 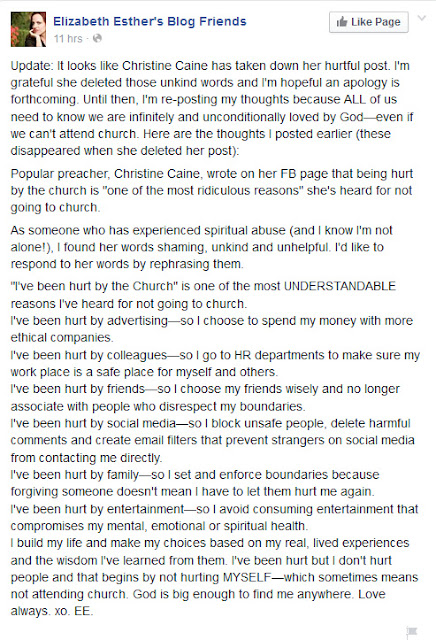 I re-posted Elizabeth Esther's response and thanked her for standing up to the powerful. I'm also grateful Christine Caine appears to have listened.

I sincerely hope Christine Caine realizes she was wrong in her observation.

As Elizabeth so perfectly stated, hurt people stay away from places and people all the time that inflict pain on them, but for some reason, being abused by the church is seen as an exception to people who would otherwise advise someone to separate themselves from a harmful environment.

It would be so refreshing to read someone who is in a place of spiritual authority and power, a church leader with such a huge following and public stage, say something like "I'm so sorry you had such an awful experience, I'm sorry you are hurting or have been hurt. Take the time you need to heal, wherever you need to heal and if/ when you return to church, I pray its a healthy loving environment where you can give and receive grace. But if you never do return to a church body, God's grace and love are still yours. Fellowship can be found outside of the doors of a building. You are loved."

But they don't say such words.

Because they don't believe that.

They see the world through one filter, which is the current church structure.It's a pyramid structure of levels of authority. It's a ladder to be climbed, "New levels, new devils" as they say along the climb to the top. And that ladder is made up of people all trying to climb over each other to get to that higher level of power.  If you cloak ambition and the desire to accumulate more power and money in a blanket of showcased humility and prominently displayed service to humanity, then people don't feel comfortable questioning your words or actions because you are seen as better than them. You've convinced them that spiritually you are above them. You've climbed to new levels and anyone who confronts you is just one of those devils trying to usurp your authority.

I don't know Christine Caine personally but I have heard her speak several times at the church I use to attend. She was a regular at conferences and she also came several times a year to speak because she was friends with our pastor and his wife. For many years I enjoyed her sermons but then came that one time she was preaching a sermon about the favor of God. She told several stories about God's favor, all containing monetary or material possessions as the result of "God's Favor". She told one story about being moved to first class on a flight and all throughout the sermon she kept saying "favor ain't fair!" It was a crowd pleasing punch line. It was horrible twisting of scripture and a truly awful representation of what the favor of God really is.

But that's the point I'm trying to make with this post, Church celebrities such as Christine Caine can easily use "favor ain't fair" as the zinger to punctuate her point in her sermon because they are living off of the money given to them by people in the church. Prosperity, flight upgrades, status, all has been given to them by the people sitting in churches. She is someone who benefits monetarily from people being in church, even people who have been hurt by church so she can't very well view people who don't go to church as right, to her they are certainly wrong because church has obviously been good to her. She's making a killing from "God's favor" AKA the people paying tithe, going to conferences, buying her books, etc.

I know this sounds harsh, I can hear people now saying "She's so bitter...she's one of those hurting people who hurt people." and to those I say, look at what you have created in the church.The power structure of "new levels", the not being allowed to question "God's anointed", the culture of "protecting" those in leadership, how is that not a perfect storm for abuse and mistreatment to be cultivated and allowed to flourish? When the powerful can dismiss as "ridiculous" those who have been hurt by church and get over 9 thousand likes, well it's not those who have left that have a serious problem to fix, it's those who have stayed.

Men of God The American/Celebrity Church The Church