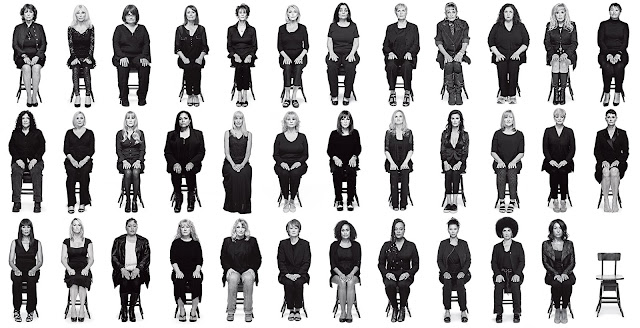 Last night I read a stunning article in New York Magazine where 35 of Bill Cosby's accusers told their stories.

The cover image itself spoke volumes, it was striking and pointed.

This story is so disturbing and sadly telling of my generation and previous generation's view of men and rape.

I believe these women and I'd like to tell you why I think this story is so important.

For my 14th birthday I had a party in our backyard. We were drinking. A guy I was somewhat interested in asked me to show him where we went hog hunting. I knew he really didn't want to go into the woods to see where we go hog hunting, for one, I had never gone hog hunting. But I walked into the small patch of woods by my house with him anyway. My head was foggy from the alcohol. As soon as we were in the woods he grabbed me and started kissing me forcefully. He stuck his hand down my pants and I tried to push him away. He held on tighter. I struggled some more to get away then I pushed hard enough for him to stumble over a log on the ground and I ran back to the party. I ran straight to the bathroom, crying. My sister and her boyfriend Timmy asked me what was wrong and I told them. Timmy and his friends threatened the guy and made him leave the party.

After that night I wouldn't get drunk at parties. I would carry a drink in my hand, act drunk, but wouldn't actually drink the drink. There was several times when guys at parties would ask "You wanna go for a walk" or "Hey you want to go listen to the radio in my car?" But I knew better.

When my sister was 13 years old she was dating a much older guy in our neighborhood. He was very cute, tall, charming. One night when they were swimming with another couple, she was raped by her boyfriend in the pool. She told him no, to stop, she didn't want to do that there, in front of other people, but he didn't stop. He was 18. She didn't tell me or anyone about the rape until we were in our 20's. As she said, there wasn't "date rape" when we were younger. If you were dating a guy and put yourself in a situation, well it was your fault for being a female, it wasn't "rape" because you liked the guy, you kissed him, maybe wanted to eventually have sex with him so he was just the victim of you defrauding him and teasing him to the point of not being able to control himself. It wasn't rape.

(I do want to note that my mother believed me and never blamed me and we left the minute she found out and we never looked back.)

My grandmother's generation was even more prone to find some way to blame the female in situation like that. Her conservative Christian upbringing taught her that men were the leaders, as a woman you had to submit to them, had to protect men from evil Jezebels out to seduce them. Women didn't protect and believe each other as much as they protected and believed men. Even if you were an innocent child, somehow, you did something to cause that man to lose control and it was your fault for being "sexy".

I could tell 10 more stories just like mine and my sisters. True stories of women I know, friends, family members, acquaintances. No didn't mean no for my generation and the generations before. Women were somehow to blame for any and all unwanted sexual abuse.

So can I ask you all a favor? If/when a woman tells you her story now, please don't ask why she never spoke up before, what she could/should have done to avoid it, or why she didn't press charges, because you have to understand that things were different then. Women were not believed, women were blamed, women blamed themselves and each other. If they tell you their story now they are being brave and need you to listen, believe them and don't search for a way to make their sexual abuse or rape their fault. Please just allow them a safe place to free that painful, awful secret.

Thank God we know better now and we can all do better now.
family Finger Nail Droppings rape TV