Why Dylan Farrow's Words Matter to Me 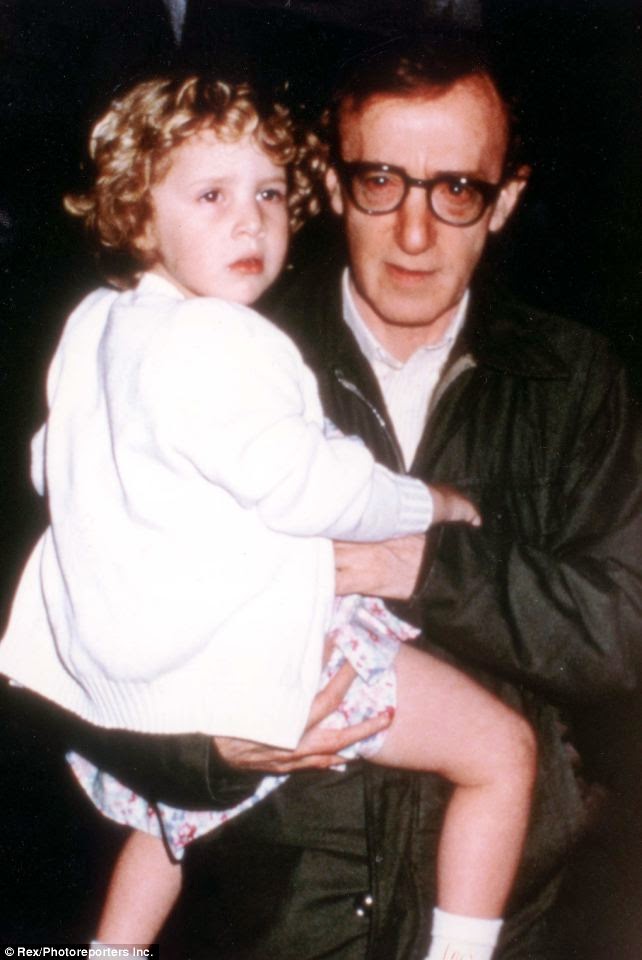 Dylan Farrow is the daughter of Mia Farrow and Woody Allen. Yesterday she wrote in detail about the sexual abuse she suffered at the hands of her very famous father. Abuse we have all known about since it was made public back in the early 90s. Abuse not many people really cared about when it came to Woody Allen. Hollywood still bankrolled and promoted his movies, stars still clamored to work with him, and called him a genius. We went to see his movies and made him an even richer man then before he was accused of sexually assaulting his child.

He was never charged with raping his daughter, prosecutors at the time felt Dylan was too fragile to go through a trial. He did lose custody of his children thank God but he was never imprisoned like other child molesters, he doesn't have to tell everyone that he's a registered sex offender, he can not only live near and work with children, he married one of his own step daughters.

Woody Allen molested his innocent 7 year old daughter, I refuse to use the "his adopted daughter" language that's being used by the media in reference to Dylan. How offensive! She is his daughter. Period. He is her father. Adopted or not. We don't clarify for the sake of making the offense less repulsive, as if to imply it wouldn't of happened had she been his biological daughter. We know for a fact many fathers do molest their biological daughters. Woody and Mia adopted Dylan as an infant, she is their daughter.

And what about the "adopted daughter" he married. Woody and Mia never married but Woody was the step father to her children from her previous marriage, Soon-Yi was 10 when they moved in with Woody, they lived with him for 10 years, Soon Yi grew up with Woody as her step father, he is the father of her brothers and sisters, how in the world he can say that relationship isn't scandalous, disgusting and wrong, shows clearly that he has a sick moral compass.

But now here we are, 2014 and Dylan has now spoken clearly about the abuse, one month away from the Oscars in which of course, Woody Allen has a movie up for best picture, he's moved up and on over the last 15 years from marrying his step daughter and molesting his daughter. All is more then well for Woody, but as with all truth, like a flash light in the pitch black, the "on" switch has been flicked and the light is now showing how dark the darkness actually is.

Celebrities will campaign against the trafficking of girls, "Men don't buy girls" their signs read. Trafficking is "the cause" still but how can they support financially and with accolades and awards a man who sexually abused his own 7 year old child? Hollywood was repulsed by Jerry Sandusky but not Woody Allen? They preferred to bury their heads in the sand, act as if it wasn't repulsive for him to marry his step daughter, the sister of his children who was hardly an adult herself when they started exchanging naked pictures. They prefer to believe Dylan was lying, put up to it by Mia during a custody battle, refusing to see the proof staring them in the face.

I say bravo to Mia for believing her child, for leaving and taking her children away from a predator. I thank my mom for believing me without question, for protecting me and leaving before the abuse escalated. I'm glad victims of sexual abuse are speaking out more and more now and not allowing their abusers the victory. Thanks to people like Dylan Farrow even more will be empowered to speak and be heard.


This time, I refuse to fall apart. For so long, Woody Allen’s acceptance silenced me. It felt like a personal rebuke, like the awards and accolades were a way to tell me to shut up and go away. But the survivors of sexual abuse who have reached out to me — to support me and to share their fears of coming forward, of being called a liar, of being told their memories aren’t their memories — have given me a reason to not be silent, if only so others know that they don’t have to be silent either.
Today, I consider myself lucky. I am happily married. I have the support of my amazing brothers and sisters. I have a mother who found within herself a well of fortitude that saved us from the chaos a predator brought into our home.

But others are still scared, vulnerable, and struggling for the courage to tell the truth. The message that Hollywood sends matters for them.