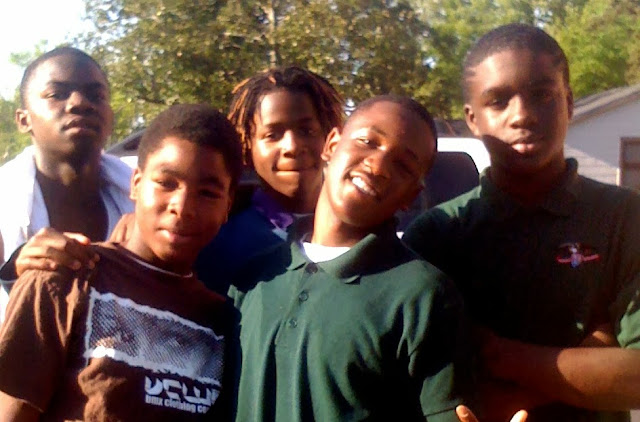 This picture is from the after school program in 2008. The guy with the white towel on his neck to the far left is Darius. He was 15 at the time of this picture. Back then Lorri Earles and I were volunteering at the program several days a week. Lorri took special care with Darius, she had heard his story and it scared her heart.

Darius never knew his father. When he was 9 years old he got into an argument with his mom and stormed into his room after yelling "I HATE YOU!" to her. His step dad was trying to watch TV but the fighting between Darius and his mom was getting on his nerves, she was yelling at him too, so step dad got fed up, took a gun and shot Darius' mom in the head. Darius walked out into the living room to find her dead on the floor.

That day he lost his family; step dad to prison, mom to death.

He had grandparents and an older sister who took him in and tried to fill the void but Darius was always angry inside.

He spent time in foster care because his family couldn't handle him.

When he came to the after school program you could feel the chip on his shoulder. He dared you to knock it off. "Nobody was gonna take advantage of Darius", was the air he made you breathed around him. One day he was acting cocky and mouthy and Craig told him he would have to leave if he was gonna use profanity. Of course he kept on, adding week after week that he could not return to the program. Pastor Craig was fuming mad by the time Darius finally left the grounds and walked home. That night Craig felt God speaking to him that he needed to call Darius in and just talk to him one on one and love on him. So he did and he heard Darius's story. It broke Craig's heart. Gave him some perspective on this angry, troubled young man.

One day at the after school program there was fighting going on and a police had been called by another organization housed at the Dream Center. Darius was accused of starting the fight, Craig was heartbroken and tried to speak to Darius but he was all wound up, yelling profanities so he was asked to leave and Craig was walking him out when the policeman tried to talk to him, and he snapped, he started cussing at the cop, tried to run, fought back, and that's when the cop gave him a beat down. I was inside when it all occurred but I heard from many witnesses, the cop didn't hold back any.

Darius's grandparents and sister were called, they came up to the DC and pastor Craig talked to them. They were kind, grateful and very heartbroken, they were at their wits end about what could be done to help Darius not self destruct. Darius was taken to jail.

A year or so later, after getting out of juvenile detention, he showed up wanting to talk to Pastor Craig. Craig greeted him warmly, Darius very humbly apologized and they had a nice talk. Craig prayed with him and welcomed him to come back any time.

We only saw Darius a few times after that.

Last night Lorri text me and told me it was Darius who had been shot at the Baton Rouge State Fair.  This is the news story;

His entire life was hard, he made it even harder, he was angry and he had reason, he gravitated toward the wrong people and it killed him.

I wasn't really close to Darius, but my heart hurts, he was one of our after-school kids and we loved him. As Craig said today when we were discussing this tragedy, "I'm not surprised you know? With our after school kids it's extremes, they either turn into Godly leaders who are changing their community or they are killed or in prison, there doesn't seem to be any middle ground." I think it's because that area, the 70805, it is always trying to lay claim to them. The streets, that toxic cesspool of poverty, crime, fatherlessness, it is always working to suck them down into the muck and take their lives. The ones who break away have to fight so hard against that pull.

So many are lost. Thank God for the ones who aren't, they will be what turns the tide.

We will remember you Darius, the boy trapped inside the pain, tormented by grief and anger, lashing out, wanting just to be loved but not knowing how to go about it. You ARE NOT just another one of the boys in the hood who dies an no one notices. You matter.