I Am The Hulk

February 17, 2016
From a post I did right after going to see the Avengers a few years back.. 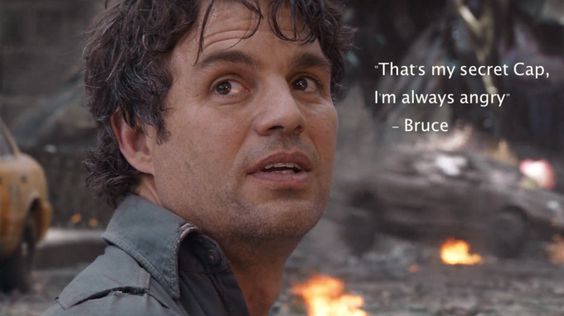 “Dr. Banner, now would be a pretty good time to get angry,” says Captain America (Chris Evans) to Mark Ruffalo’s Bruce Banner at the precipice of the fantastic, action-packed climax of  “The Avengers.”

“That’s my secret, Captain. I’m always angry,” Banner replies, right before running towards a giant mechanical creature, transforming into the Incredible Hulk, and tearing it to shreds.

That was my favorite scene from the movie.

Captain America had asked him at the beginning of the movie what the secret was to him keeping the Hulk from taking over whenever he wanted But Dr Banner didn't answer him until later in the movie during his perfect scene.

Yesterday E was telling me that her Friend Haley told her, "I don't know if I've ever come to your house when your mom wasn't cranky" and I responded to E with, "That's the secret Captain, I'm always angry."

Dean was sitting on the bed and I looked at him and said "I'm like the Hulk baby, always just keeping it at bay, trying not to lose control."

and he said "This is you keeping it at bay?"

We both laughed, he came and hugged me. I wasn't mad, I was laughing because it's that kinda truthful funny moment where you laugh to keep from crying.

See, my nature is wound up tight, react knee jerk style, come out swinging and barking. I struggle with that nature more often then I care to admit sometime.

It's my thorn in the flesh.

If it wasn't for Jesus, I would be much worse. I know this. My family knows this. They have grace for me. They know I try very hard to be nice. I know I need to try harder.

Sometime people just aggravate the crap out of me. So, I pray "God help me not be a B@#!H today. Help me be like you Jesus."

And he does help. The grace of God is good.

But like the Hulk, there are times when Jesus uses that fire, that kick, that bark, that anger.

He said "be angry and sin not", he didn't say don't ever be angry. He was angry when they were selling crap in the temple.  So being angry sometime gets us motivated to fight for what is right.

But also like the Hulk, my life is daily filled with fighting for self control over that fire that wants to burst out when it would hurt people rather then help.

I have far to go, harnessing that anger and letting love control me is always a struggle. Sometime I use it to fight for the good and smash a puny god like Loki but sometime I punch Thor in the face simply because he's standing to close.

I Am The Hulk.