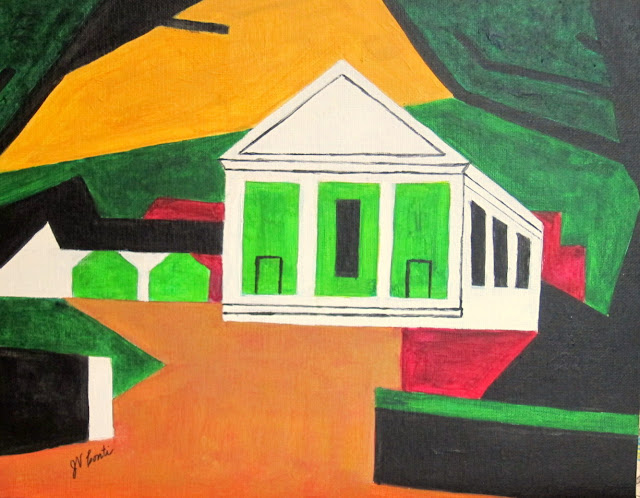 This year I spent many days asking, "What the!?" in regards to my church situation.

For starters, In February I was called into a meeting yet again for something I posted on social media. I have very different views about drinking, politics, social issues, etc, then my very conservative church and since I am considered a leader to some people, they take issue from time to time with the stuff that I post for all the world to see. I understand that, I disagree with most of it, but I understand it. These meetings are never mean spirited or intimidating, the leaders at my church are not bullies or manipulators, they just believe differently about things then I do. I can and do respect that.

So I spent the first few months of 2012 struggling to stay. Our differences theologically, politically and philosophically became more and more of a problem for me. But where would I go? My kids love this church, it's all they have ever known, Dean loves it. And even though I get called into meetings about crazy stuff, they are still family to me. So I came to peace with staying at the Dream Center Campus where we have been primarily since 2008 anyway. It's very different there, it's home, I love being a part of what's going on there, love Pastor Craig and Hope and I love that community. The main Campus is still family of course, I've worshiped and served with these people for 15 years and I love them, they love my family and have been very good to us, but I had come to a place where I didn't feel like I could reconcile our differences any longer, especially in an election year, I couldn't stomach all the conservative politics in the book store and in the pulpit, that had been taken up a couple thousand notches.

And then in July our lead pastor of 18 years, and founder of our church, abruptly went on a sabbatical for three months and then resigned for unknown (yet very known to some) reasons.

It was and still is very painful to watch. It hurts my heart for him and his family and it hurts my heart for the leaders at HPC who are trying to keep their heads above water. I believe they all love God, are seeking Him and trying to do the best they can. And they are praying. I don't envy their position, what they are dealing with right now and have been dealing with since July, it seems like such a mess that was only made much worse by attempts to keep the whole truth from coming out to the congregation and to the masses.

At the beginning of it all, when he went on his sabbatical, people were always calling me and asking me about it, they thought I knew stuff long before I did. But since I wasn't attending the main campus, stuff that went on there, even with him, was just off of my radar and had been for a while. I was probably the last to know the truth and even then, it was only part of the truth.

But when he resigned the congregation was told they didn't need to know the truth, they were compared to kids who wanted Fruit Loops, were given fluff speeches about new seasons, denied grieving as a family and treated as children. And in my heart the storm raged. What a mess. What a complete mess.

I cried, I vented to the powers that be,(and that did not go well) I wrote allegories and blog posts, wept to Mumford and Son's songs but then I just had to grab a hold of grace and mercy to keep from disappearing into the pit of despair and disillusionment. It's still a daily struggle.

These men and women certainly may have been making wrong choices in the handling of this situation but would I have done any better? Sure, I'd like to think I would've, but had I been living in that same bubble, I doubt it. They had never been faced with this before, maybe they did the best they could, I would like to think so even if I still and always will have a million unanswered questions.

In the easy silence I feel the peace of God. It's not telling me "it's all OK" but rather, "Rest. Be still. Forgive. Extend grace." and so I try to walk in that today.

I pray for everyone that is still hurting, everyone who still has more questions then answers, everyone who feels lost because their leader, the one that for years inspired them, has now disappointed them. I pray for everyone that is trying to make this right and trying to hold together a church body that is disoriented from the blow, still hurting and still in mourning. I pray for restoration, peace and healing to him and his family.

It's all still kind of unbelievable to me actually but I'm getting more use to the reality with each passing day. It's like the unimaginable happened and now we all just have to pick up the pieces.

Kacie said…
*sigh*
I walked out of church like three times this year, and I love my church too. It was usually over politics, and it wasn't angry walking out because I wanted everyone to know I was angry, but rather a slipping out because if I stayed longer I would only get angrier and that wouldn't be good at all.

I still don't know if it's my church, or the state of my heart that pushes me to be angry and unsubmissive to leadership in general in all areas of life. I'm reading the early church fathers and am struck by the importance of submission to church leadership, but then that's when there was just ONE church per town. So when now it's my church vs. 10,000 others, and I am just as educated as most of my leadership, what now?