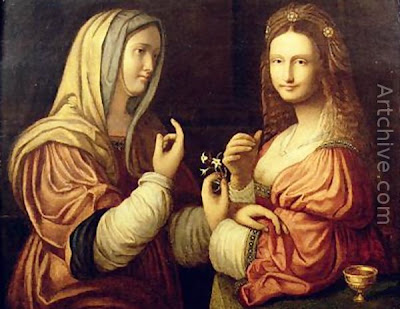 You know who I'm talking about right?

The sisters in the bible?

You don't? Well here's the story..

At the Home of Martha and Mary

38 As Jesus and his disciples were on their way, he came to a village where a woman named Martha opened her home to him. 39 She had a sister called Mary, who sat at the Lord’s feet listening to what he said. 40 But Martha was distracted by all the preparations that had to be made. She came to him and asked, “Lord, don’t you care that my sister has left me to do the work by myself? Tell her to help me!”    41 “Martha, Martha,” the Lord answered, “you are worried and upset about many things, 42 but few things are needed—or indeed only one.[a] Mary has chosen what is better, and it will not be taken away from her.”

I believe that everything in the bible is there for a reason, to teach us something.


Many people use this verse to teach us Martha's not to worry.

Not to be wound so tight like the popular Martha of our time, Martha Stewart.

Being called a Martha is like a dis now.


But I don't believe that was Jesus' intent with this story.


Sure, he basically says 'Hush woman, I ain't worried about all the dishes piling up in the sink RIGHT NOW, let's visit, let's enjoy each others company, Mary is doing that, so should you.Chil-lax chick!"

See, Jesus knew his time was short to be here on earth in the form of a man.

I believe that at that moment, absolutely, Martha had no clue how precious that time with him was, but Mary did and so she only wanted to sit at Jesus feet an listen.

The dishes could wait.

But I wish there was more to this story.

I looked for a verse after this, but there isn't anything else about this particular gathering.

I imagine that after Jesus kindly said, “you are worried and upset about many things, 42 but few things are needed—or indeed only one. Mary has chosen what is better, and it will not be taken away from her.” Martha stopped, sat and enjoyed Jesus and looked over at her sister and thought "he's right, It wont be taken away from her but after he leaves we are doing these dishes."

That's why I think Martha gets a bad rap.

Even when she's relaxing, she's thinking about what needs to get done.

She cares if the rug is crooked and the pillows on the couch are messed up.

She cares if the dishes get put in the sink when it's just as easy to put them in the dish washer.

Martha's are the chicks described in Proverbs 31.

Well, maybe not velvet, but you get what I'm saying.

And Jesus didn't tell Martha not to be that way, he just said that at the moment, only one thing was needed, His presence, and that was there so she shouldn't worry about the other stuff...until later.

So, I don't consider it a slam when Mike, our band director at the BRDC calls me Martha, I consider it a compliment. Martha set an environment in which Jesus felt at home, and the disciples and Mary could chill at the feet of Jesus.

The bible says that Martha and Mary were friends of Jesus.

I, just like Martha, get rebuked by Jesus from time to time for stuff like being overly concerned with the fact that someone left a water bottle on the altar table at church.

That's when I hear Jesus say something like; "let it go Martha. It's OK. Let's visit, enjoy each others company and lets laugh together my friend"
Jesus My issues

Albert said…
Powerful testimony. Thanks for sharing and Happy Easter. :)