Extra Mussings: You have the Floor 'Speaking Part' Girl

April 30, 2012
Watch this video before reading this post and everything will make sense..trust me. Your welcome.

It was warm in the Extra's holding tent, warm and crowded with 18-25 year old's, we were shooting a high school scene for a TV movie called Thunder Struck.

My friend Esther and I were playing teachers, besides the guy playing the principal, we were the oldest people there.

But even though it was a crowded, hot tent, we were happy because it was lunch time so everyone was excited to be taking a break.

As we got our food and sat, Esther and I started chatting with the young ladies we were sitting by. As is the usual in Extra's holding, the conversation turned to us swapping movie stories. I was still very young in the biz and my Mark Wahlberg story was then and is now, my favorite one to tell, so of course I told it.

There were five of us sitting together, but only four of us were trying to talk over each other, waiting for the others lips to stop moving so we could tell an even better "I made a movie with so and so" story but girl number five just sat quietly eating, smiling at us while listening to our stories, chewing her food.

Then, when it appeared we had exhausted all of our tales of brushes with fame, girl number five just very casually said, "I had a speaking role in Battle Ship. Worked for 6 days on that one scene." We all fell silent for a second.

"Wow! really?" I finally said and then we all started to quiz her on that experience. Our stories no longer mattered, none of us had ever had a speaking role.

We were making $80- $125 a day walking in the back ground of scenes or, at best, getting to be a "featured extra" in a smaller scene where we weren't blurry.  None of us had ever had a speaking part.

We had all been beaten in the "who has the best movie story" game. 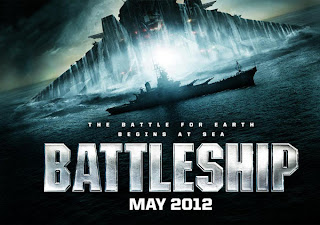 I always joke with Esther about that day in Extra's Holding because her and I are big fans of Brian Reagan's. Esther has watched the "Me Monster" video as many times as I have and that day when that girl very casually said "I had a speaking part.." I immediately thought to myself, "well you have the floor 'speaking part girl'". It was such a Brian Reagan moment!

Our stories were two wisdom teeth stories, her's was an "I walked on the moon" story.

BTW, She's a little strawberry blond young lady, I forgot her name, but she's in a scene in the control room of the movie Battle Ship that comes out this month.  I hope she makes the cut.
extra Humorous History movies