Johnny's Got a Gun and 20 Years Without Parole

No chance of probation or parole.

Everyone at the white mall can breath easy now, that black kid who fired shots and wounded two white kids in your area is locked away now until he's almost 40.

No chance of parole or probation. Tell me a white kid who shot into a crowd, missed his target and hit two white kids in the legs would of gotten the same. He may have gotten 20 years but he would not of gotten no chance of probation or parole. I don't believe it.

When Johnny was arrested, I know that he sat in prison for MONTHS without seeing a lawyer. I know this for a fact. Sure, he "has a right to an attorney..one will be provided for you.." but in that little speech and in those rights it says nothing about how long it will take for that attorney to meet with you. AND when he or she does, do you really believe they have any time to devote to you? No, your one of hundreds maybe that that public defender has to represent. So, what do you get little 17 year old gang banger that no one gives a crap about? You get the quickest solution, plead guilty to attempted murder, an we may can have you out in 20 years.

I'm not saying he wasn't trying to kill someone, I'm not saying he doesn't deserve to go to jail. I just don't think society is served by locking up a teen who got into the wrong crowd, during the prime of his life and then releasing him back into society as a 40 year old, ruined by prison.

It's like our philosophy is rather then fund some sort of program that could really help a lost gang member, lets spend more money on prisons. Out of sight out of mind right? And that doesn't seem to be working too well.

Johnny was so much more then this.

He was in a car with guys who he wanted to impress, people he had connected with, like most lost boys on the streets, he had found a new family. One of them handed him a gun, it was his turn to be the big guy, show his loyalty, prove he was really one of them.


I first met Johnny in September 2008. He was 13 years old. But after talking to him for only a few minutes, I felt like I was talking to someone much older. Craig, who is the pastor of the Dream Center now, was over the after school program then, he always said that Johnny was a 30 year old man stuck in a 13 year old boys body.

Johnny was usually high on pot when he came to the after school program so he was mellow. He just kinda did his thing, hung out, played a little basket ball, talked to the adults, the kids, and just went with the flow. But it was almost like he was observing.

He had an air of leadership about him, you could see the potential. He was usually serious, like there was so much behind those eyes that he was protecting and he was one of those kids that we were always happy to see.

Johnny had come to Baton Rouge from New Orleans to get away from Hurricane Katrina. From what I understand the story to be, he came and stayed with his moms boyfriend and I think there was a grandmother but there was never a father in the picture.

Back in 2008 and 2009 he came to the after school program almost every day it was open. Pat and Lorri Earles had him over to their house with a bunch of other boys to stay the night one weekend. Craig, Corey, Paul all invested in Johnny.

But then a couple years ago he moved away from the Dream Center area. We saw him a few more times after that but no one seemed to know where he was living and how to get in contact with him.

Then last week Craig text me this picture and said "Know who this is?" Of course I did and I responded with "Johnny" Then he sent me the news article.... 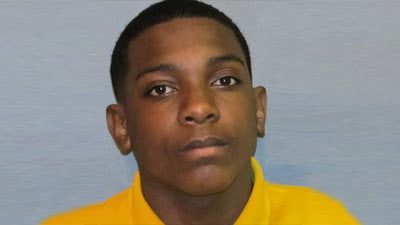 BATON ROUGE, LA (WAFB) - Charges against a 17-year-old have been dropped and another teen has been arrested and charged with four counts of attempted first degree murder for the shooting near the Mall of Louisiana Saturday night.

On Tuesday, East Baton Rouge Sheriff's Detectives arrested Johnny Williams for the shooting in which two innocent teenage bystanders were shot. Charges against Meco Green, 17, have been dropped by the District Attorney.

Following EBRSO's initial arrest of Green, based on multiple witness statements and positive identifications, detectives received a Crime Stoppers tip that Williams was the shooter.

Detectives continued to investigate the incident in order to carry out due diligence and gathered enough evidence to charge Williams and release Green.

According to reports, Williams argued with another man outside the mall. He then fired several shots at the man and struck
Read more http://www.wafb.com/story/16477397/new-suspect-arrested-in-mall-of-la-shooting-charges-against-teen-dropped

I was sick after reading it. And heart broken.

The kids that were shot were suburban white kids walking outside the popular mall in town. They were shot in the legs and arms and are still recovering from their injuries.

Innocent by standards were injured from what appears to be gang violence (yes, I feel pretty sure this is gang related. It's been back and forth for a little while now, two gangs in particular) innocent people were caught in the cross fire on the good side of town, not in the hood where stuff like this goes on every day virtually unnoticed by anyone outside of the worse zip codes in town.

And it was our Johnny doing the shooting.

When I saw the mug shot I knew Johnny had found the family he was looking for. He found the other lost boys, the others like him from the fatherless generation...like so many others like him do, he found fathers and brothers in the streets, in a gang.

We lost him and they got him.

Now, he will spend time in prison for attempted murder.

Thank God no one died at the hand of Johnny.

But I'm glad Jesus forgives, heals, and uses even the worst of circumstances to reach people. He loves Johnny and though it may be very hard for some to muster up compassion for a gang banger who shot innocent people, it's not hard for Jesus, His grace and mercy are beyond our comprehension and if jail is where Johnny has to go to find Jesus, then so be it.
Boys in the Hood Dream Center

Anonymous said…
What would be great is if Hillar Moore went after the guys he was trying to impress as an accessory to the fact. Louisiana is the MOST imprisoned place in the WORLD, not America, THE WORLD!!! This kids did something dumb that is true but 20 years without the chance of parole? That's not justice!! That's INJUSTICE!!!
2/27/2013