Will Ferrell AND Leonardo Coming to Swamp Hollywood!

August 25, 2011
Not too long ago I told Dean "I'd love to do a movie with Will Ferrell". We own almost all of his movies. We quote them on a regular basis.

And everyone knows that Leonardo is right below Mark Wahlberg ( I was in a scene with him, he touched my arm and talked to me, in case your new here and haven't heard :-) on my list of stars I want to be in a movie with.

Now it looks like the chances of that happening are getting really good...

No joke -- A-list funnymen Will Ferrell ("Anchorman") and Zach Galifianakis ("The Hangover") are headed to New Orleans to shoot their next movie, "Southern Rivals," a film set in the comedically fertile world of modern politics. 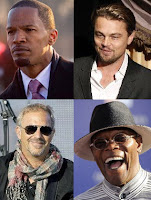 And then this from http://www.nola.com/movies/index.ssf/2011/08/quentin_tarantinos_django_unch.html

A-list cast, which includes Leonardo DiCaprio, Jamie Foxx, Samuel L. Jackson, Kevin Costner and Christoph Waltz, details on "Django" have been scarce.... the New Orleans Office of Film & Video confirmed that the Crescent City will be home to at least part of the shoot.


It is on like King Kong in a thong singin' a song playin' Donkey Kong!!
extra movies