August 26, 2011
I first met Sharon three years ago on Midnight Outreach. Her and a friend were working north Airline Hwy, a known prostitution track.  I noticed her immediately because she had the most beautiful long, wavy, carrot red hair. She told us that she was a backslid Pentecostal. She said she knew Jesus and prayed everyday. She let us pray with her and she said she would come to church the next Sunday.

Alliece, who was the leader of Midnight Outreach, had to tell me that Sharon was a prostitute because she didn't "look" like one to me at the time. She was so pretty. She had that "girl next door" look.

That night Sharon told us that she was 18 years old.

I've seen Sharon several times over the last few years. I would look for the red hair as I drove down Airline. Each time that I've seen her she has looked worse and worse. One time when I saw her her face was covered with sores and her body looked so emaciated from the drugs.  Her red hair was shorter, matted, dyed dark with what looked to be a cheap rinse. I could see the vibrant carrot red trying to peak out.

Then last Spring I saw her working Airline Hwy. I stopped to talk to her, she was walking very fast away from a john, she kept glancing back at him, Her face was swollen from a fresh hit, given probably by him. I asked her about it and she said it was a bug bite. I offered to take her to the hospital, she refused. I told her she could come to the Cafe and get some free coffee, food, clothes, bandage for her face, access to resources around town that could help her. She politely took the card and said she would check it out one day.

Then when I was working for the Street Outreach grant at the Dream Center last fall, I went looking for Sharon, and I found her in her normal area. When we stopped to talk to her and give her a bag of goodies, she again told me how she was a backslid Pentecostal and how she felt sorry for the girls "out here" that don't know Jesus at all. I told her that Jesus will meet her right where she is and He loves her no matter what. I again asked her if she needed anything and she said no, I also invited her again to come see us at the cafe for some free cloths and stuff. She said she might, like she always does.

Before we parted she said "ya'll pray for me please" I said "Let's pray now" she looked back at the john waiting for her on the porch of the house, "Uh, well I gotta hurry up, he's gonna let me use his phone". I told her I would be real fast as I put my hand on her shoulder and she moved in closer, letting me know she was willing to let me pray for her quickly. I asked God to surround her with His love. Love that heals. I asked Him to show her that she is a daughter of God, with a divine purpose, a beautiful daughter and her heavenly father loves her.

I choked back the tears as I finished the prayer.

"Bye ya'll" she said looking back over her shoulder as she walked quickly to her waiting john.

A while back I was in a meeting with Alliece, we were talking about effective ways to reach out to prostitutes working on the streets. She suggested one way was for me to get a bag and fill it with hygiene kits and keep them in my van so that when I stop and talk to the Sharon's of the world, I have something to give them that they need. So that's what I did. 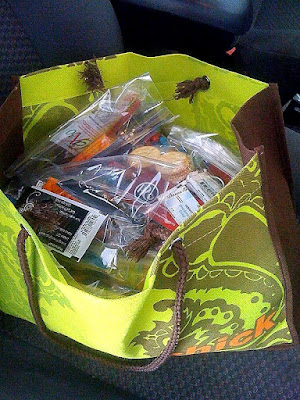 Each zip lock contains some soap, a toothbrush that already has tooth paste on it, some bug repellent, some crackers, breath mints, a flier with information about all the services offered at the Dream Center and a Dream Center card. I have given out many of these bags over the last couple year. They are great conversation starters and one lady that we know of, came to the Dream Center and went thru the Step Out Program to get into a rehab facility.

But the last time I saw Sharon was almost a year ago on Midnight Outreach. She was high,walking her normal track. She had several teeth missing, and looked really awful. She said she had just gotten out of jail and she cried telling us how the guards and people in jail had raped and abused her. She kept saying "It was bad, so bad, so bad. They hurt me...so bad" She was soaking wet with sweat. We didn't care, many of us hugged her, held her and prayed with her. I told her she had to get off the street or it was gonna kill her. I offered to help her. But as usual, she said she would come to the Dream Center Cafe..one day.

Lately I have been very concerned for Sharon. Every day now I feel compelled to pray for her. I fear something terrible has happened. I know the police did a big prostitution sting about 6 months ago and they arrested a lot of them, and of course only a few John's were arrested because that's just how it goes. I looked for her name in the police reports (sharon is not her real name, I just use it on here) but I didn't see it. But I wonder if she's back in jail getting raped and beat up?
If your reading this, would you take a minute and pray for Sharon? Pray we find her again. Pray she's ok. Pray she comes back to Jesus.

God be with her. Show her your true, real, gentle and kind love. Help her Jesus.

UPDATE: I received word Friday that there's a good chance she is in parish prison and pregnant. She fits the description of a girl by her name that is there. Should find out for sure if it's her by Wednesday.
Dream Center human trafficking The Church