Boys in the Hood: Funeral for a 15 year old 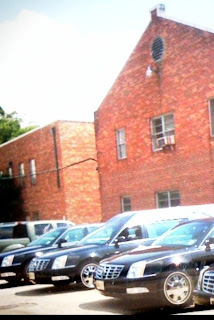 On Thursday the Baton Rouge Dream Center hosted a funeral for a 15-year-old boy who was murdered, in daylight, while standing in front of a friend’s house. He was part of a gang.

When I arrived, Pastor Craig asked if I could do something with the pictures that the mother had scanned and put on a disk to be shown at the end. So I went to my office and got busy cropping them, adjusting the shadows, lighting, etc, whatever I needed to do, to make them look the best they could.

There were 13 pictures, and in over half of them, this 15-year-old boy was making his gang sign and he was wearing the gang’s official outfit, plain white T-shirt and jeans. There were pictures of him much younger, maybe 9 or 10 years old, and even in those, he was flashing the gang sign. There was one picture of him when he was a toddler with a man holding him, maybe it was his father.

Not sure that his father came to the funeral.

But his gang member friends came.

I had seen this little group before, walking around the neighborhood, at the store on the corner, always wearing the white t-shirt and the jeans and always together.

After the funeral I went up to talk to them. A couple of them told me their names. One of them had the sweetest smile and his voice was still not fully manly. He introduced me to the murdered boys cousin and he told me they all went to Capitol Middle School.

“You play sports?” I asked “No Mam” he said. “Well we have art, tutoring, hip hop dance, gardening, all kinds of cool stuff. Ya’ll should come next Thursday afternoon. It’s called the Dream Lab, it’s our after school program for teens”. I said out of desperation. I wanted to grab him and squeeze him. I wanted to be a strong, Godly man that could shake his hand and say “Hey bro, lets go play some hoops sometime. What do you like to do? I’d love to hang with you and get to know you” or something like that. I wanted to be someone that could mentor every last one of them. I wanted to be the good, kind, hardworking, and Godly man, these boys needed. Because the truth is, that is why we were all at this funeral today, because the dead 15 year old didn’t have a father, he didn’t have a mentor, he had the streets and the gangs and they gave him what he longed for. They gave him a sense of belonging. They gave him brothers, fathers and a sense of purpose. They gave him a family.

Now I’m going to break right here to say, I have laid off of these kinds of posts for awhile due to a couple reasons; I didn’t want to sensationalize the lives of the people I get to serve in the Dream Center community and I didn’t want to exploit them either. There is a fine line and learning to respect that line and walk it, is sometimes difficult. But more so, for a long time I have bowed to the fear that my suburban living friends would be more afraid to come serve at the Dream Center if I tell the truth, but today, I’m not going to let any of that stop me because I type this knowing this needs to be said and this story needs to be told.

See, I know many people stay away from the hood or the inner city because they are afraid or they may call it “cautious” or “careful” and I understand that. I know that the fact that I’d rather be talking to a transvestite on Plank Rd in the middle of the night is not the norm for a 43-year-old lily-white redneck. But I also know that there are some amazing mentors staying away from the hood, who need to be in the hood mentoring these boys.

So we don’t have to bury another 15-year-old gang member.

I know that to some it may sound really far reaching to say that if these boys had mentors they wouldn’t join gangs. But it’s not. Statistics have shown that at-risk youth, who are mentored, are more likely to finish school and less likely to be involved in violent crime, drug dealing, and gangs. You may say, “They just need Jesus. They need to get saved” ok, then come save them. Come be Jesus to them, because they certainly are in hell right now. How will they ever believe in Jesus in THAT world? Tell me? You come show them Jesus and then, maybe they will believe and be saved. All the preaching, they hear it. They just don’t see it. They see the streets.

On the way home from the funeral, I couldn’t stop crying. It felt as if someone had placed a brick on my chest. But I was glad for the tears and glad for the brick.

God broke me again. He reminded me of my purpose in life and he made me cry for their pain. He reminded me also that part of my job is to tell their stories and try to inspire others to come be a part of changing the lives of these youth. If we don’t get them, we have lost a generation to gangs, prostitution and the streets. It doesn’t matter how many adults we pad the pews with, we have to reach the youth, we have to help them to see who they really are, help them to find family in God’s family, help them to reach their destiny.

Please come help us do that.

If you are not local you can contact The Mentoring Project to find out how you can get involved in mentoring in your area.
Boys in the Hood Dream Center