My Thoughts on the Book, “Love Wins” by Rob Bell 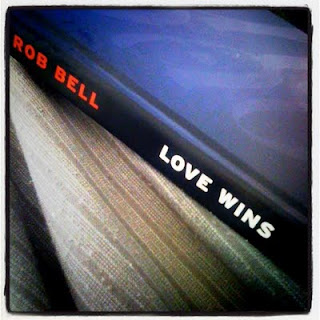 A friend of ours, Shawn Wilson, lent me his copy of Love Wins. I read it over the last three days, while I was an extra on the set of the movie Abraham Lincoln Vampire Hunter. (We have lots of down time waiting between scene takes) I found it surprisingly easy to read. There were only a few times where Bell started to sound like a hippy spinning, but it didn’t last for long.

The writing was very interesting; it held me captive the entire book. It was very well researched and heavy on scriptural and historical context, I love that kind of stuff.

I've heard a few “scripture grenades” lobbed at Bell from his critics, in knee jerk response. But they are usually thrown by people who long ago stopped looking for answers, all the exploring and learning for them has been over for a while, they are not open to learning anything more about certain, sacred beliefs. They simply dispense the cool aide.

They don't even see the questions anymore, so why should Bell?

They certainly don’t ask the questions, so why should Bell?

And that is why this book has hit a nerve; it verbalizes and explores the scriptures that cause the unchurched to ask question. But what is worse is that Bell dares to ask the questions to his huge following. He dares to be an evangelical mega church pastor and ask these questions.

This book looks at the possibility that we may be wrong in asserting with certainty what will happen, it explores the unknown behind certain sacred text. It dares to dig a little deeper for the true meaning. And for the people who have settled their rightness on these issues long ago, this book is just really bad business for Christians. It's heresy.

The truth is, we like the thought that some people will one day bust Hell wide open. The child molester, the murderers, the traffickers, the abusive husband, we feel they deserve Hell so the thought of them not spending eternity there, is not comforting to us. Telling people about Jesus or inviting people to church will not have a punch line if there is no Hell. If your not trying to avoid Hell, then why bother?

Many would be lost without the fear of Hell keeping them in check. Their lives as believers would lose all of it’s meaning. They love God and love people because that is what keeps them from eternal torment.

In response to me posting a picture of TIME magazines cover story on Rob Bell, a friend of mine commented, “it’s sad that a former Christian is getting that attention.” So if you don’t believe that the lost will burn in Hell forever, or if you don’t believe in Hell at all, then your love for Jesus, the fact that you follow Him, introduce Him to other people, are full of His love and mercy, is no longer valid?

Where is that in the bible?

Where does it say, “For God so loved the world that whosoever believes in him (and eternal torment in Hell) shall not perish but have eternal life”?

The craziest thing is that Bell doesn’t even say that he absolutely doesn’t believe in Hell. He does explore the possibility of it being more of a space after death where more purification is done. Much like CS Lewis did in the book The Great Divorce (my #1 all time favorite book ever!) He does seem to believe that we create our own Hell here on earth, and that we create Hell for others here on earth when we act evil. Again, this is similar to what CS Lewis talked about in many of his writings. He believed that once we are redeemed, everything in our past became redeemed and part of Heaven, so that when we arrived in Heaven, our lives here on earth were the beginning of Heaven. Same for Hell, no matter how good we were here, no matter what wealth or pleasures we had here, they would all be hellish once we died and just an extension of the eternal Hell. It’s the basic belief that even now we are part of eternity, whatever path we are on. I believe that as well.

I’m not the sharpest tack in the shed, so all of the deep theologians please give me grace here, but I really don’t see how this book hurts Christianity, it’s purpose, it’s mission or anything. I’ve read at least 10 reviews that spend a lot of time refuting Bell’s claims, dissecting each chapter, etc, so I hear the arguments, and I think many are valid.  But personally, if I die and find out there is no Hell, then that will have absolutely no effect on how I spent my life. Jesus in me, working through me, has nothing to do with heaven or hell. I know, I know, how dare I say that, eternity should matter more then anything to me, but I do believe as Bell does in that I believe right now, I am a part of eternity. Who I am now, how I live, has everything to do with eternity. They are not separate. Death is the door to another part of the house but it’s the same house. So, I don’t look back and think “dang! I could have been doing sinful things this entire time since there may not be a Hell!” Jesus has filled my life with love, mercy, grace; I wouldn’t trade one second of that for anything. I want more of that! And it has nothing to do with staying out of Hell, but it does have everything to do with not wanting to create hell on earth for others.

I see Him in my children, in the poor that I spend time with, the hungry and the hurting, they see Him in me when I’m kind and loving and I do unto them as unto the lord. No matter what eternity holds for the evil of this world, I’m so glad I get to be a part of spreading the winning love of Jesus now!