Our Adoption Journey So Far.. 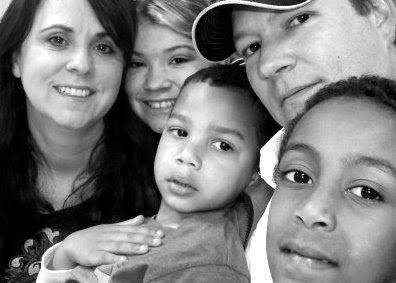 I was diagnosed with endometriosis when I was a teenager so when I got married at age 27, I wasn’t sure if I’d be able to have kids. After a year of trying to get pregnant my husband and I went to our pastor at the time, Larry Stockstill, and asked him to pray over us. Him and his wife prayed for us and that next week I conceived Evangeline. She is 13 years old now. She was a miracle, because I was told by my doctor that I probably wouldn’t ever birth children due to my Endometriosis. After she was born I tried mild fertility treatments but they only made my endometriosis worse. At age 40 I had to have a hysterectomy.

When Evangeline was about 5yrs old we looked into adoption. We knew we wanted to adopt a bi-racial child, we saw ourselves with a boy. But once we started looking into the cost of adoption we didn’t know how it would be possible. We just didn’t have that kind of money. So we laid down the dream of having more children, I started classes at LSU and we were content with our one child.

Then one day at a church sponsored health fair I saw a booth for His Heart for Orphans adoption ministry. I went over and talked to the lady in charge of it. Her name was Aimee and her and her husband had just started this ministry at our church. The ministry was to help families find financial resources for adopting and provided support to families that have adopted or were trying to adopt. I told her how we wanted to adopt but felt it was too expensive, she looked me right in the eyes, gently grabbed my arm and said “if you ever have an opportunity to adopt, don’t let money stop you. God can and will provide the money”. I walked away in tears and shaking. I tried to brush it off as her not understanding OUR financial situation but God was moving.

One month later I received a call from my sister informing me that a girl she worked with was giving her baby up for adoption. The girl had walked into my sister’s office and asked her if we wanted to adopt her baby. (My sister had told many people about our fertility issues and desire to adopt a bi-racial child) The girl was pregnant with a bi-racial baby boy.

We started the process and I immediately became overwhelmed with the cost. We had no savings, no credit cards, it seemed impossible. I was laying in bed feeling overwhelmed by doubt and fear. I prayed and then I thought “I wonder what scripture verse was printed on the journal page where I wrote about getting the call about adopting Steele?” For some reason I had not noticed the scripture verse when I wrote in my journal that day. I grabbed my journal, opened it to that page and saw “With man this is impossible, but not with God; all things are possible with God. Mark 10:27” I showed it to Dean, we were both silent, God had spoken. It was gonna be ok.

Two months later we were in a hospital in Florida getting our son Steele. Yes, Aimee was right, God provided all the money. Impossible time frame (only 2 months from the first call to his birth) and an impossible money situation, all were met by a God bigger then any circumstance.

We also had an adoption fall through a week before the baby was born in 2006. The birth mother decided to keep the baby. It was a very sad time for us. We still think about that baby boy and pray he is loved and taken care of.

My husband really took that loss hard and was not ready to head down the adoption road again as soon as I was but in the Fall of 2007 some friends called and said that God told them to give us $6000.00 so we could adopt from Africa. They knew that my heart was leaning toward adopting from there. Dean said I could start looking into it so I started looking again on Rainbow kids and other sites. I found a young man named Abel who was 11 yrs old according to the short description and he lived in Ethiopia. I immediately felt drawn to him. I talked to Dean, but at the time he just didn't feel like we should adopt an 11 yr old boy. So I let it go.

In January of 2008 I was praying, and I kept hearing Abel’s name every time I prayed. At first I thought maybe God just wanted me to pray for him, I soon realized that was not it. Finally after a few days of prodding by the Holy Spirit I got online to see if he was still available. I found him immediately and guess what? He wasn't 11yrs old he is 7yrs old!! I don't know if I read wrong or it was typed wrong or what but God wanted to make sure I knew the truth. When I inquired of the Agency they confirmed that he was 7 yrs old and still available. I had not even seen his picture yet. I called Dean, told him what had been going on with me, how I really felt God was wanting us to adopt Abel, and how he was really only 7 not 11 years old. I asked him if we could start the process of adopting him and he said yes. He now had a peace about it and was ready to proceed.

We found out that Abel had been orphaned as a baby, his mother and father both died of AIDS and he was being raised by his 50 year old grandmother. She had placed him for adoption because she was unemployed and could no longer care for him.

It took one year for us to complete the adoption of Abel and bring him home. International adoptions cost at least double what domestic adoptions cost but NO amount of money is too much for God and he provided all the funds we needed.We had many delays and set backs but now we see that God was working in the delays. He had it ALL under control.

Abel has been home a year now. It has been the absolute best year of my life but also one of the hardest years of my life.

We feel the next child we will adopt will be HIV+. I think it will be a girl, under age 5, but that is all in Gods hands. Right now we know that we are to work hard for the cause of orphaned children, especially children orphaned by AIDS and/ or the ones with HIV. We sponsor children and families, fund care centers that feed AIDS orphans, fund orphanages that house HIV+ orphans and we use our voice to advocate for them.

We know that helping orphans is what we are called to do, however that looks.
Adoption family Family Pictures Finger Nail Droppings Orphans

endo is outside the uterus, so when some women have hyst's, the endo can 'come back'

then there's diet - giving up wheat, milk, red meat, sugar can help a lot of women

i pray that more women go to abortuaries where babies are about to be murdered, and offer to adopt these precious children