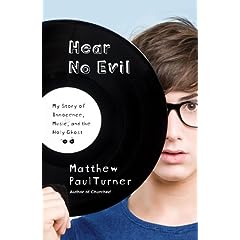 Hear No Evil's subtitle is "My Story of Innocence, music, and the Holy Ghost". A lot of it is set in the Christian Music world of the 80's and 90's. Matthew Turner, the author, was raised Fundamentalist Baptist, he didn't go to a movie until he was 19 years old and his mother thought Sandy Patty was the devil. Yea, very strict upbringing to say the least.

I really like to laugh and listen to music. They are both crucial to my mental, spiritual and physical health. SO I guess that's why I especially loved this book, it made me laugh and it was about how music affected him.

I liked his other book "Churched" a lot, it was also about his fundamentalist upbringing but more about his early childhood and it wasn't about music, so I enjoyed this one more. I have been a long time fan of his blog, Jesusneedsnewpr.blogspot.com (he's big time and still uses Blogger like me ;-) it's irreverent, edgy and his collection of Jesus pictures are book worthy! His twitter (@jesusneedsnewpr) commentary on everything from American Idol to the Olympics is hysterical too!

Having been raised Baptist and then becoming a Christian at Jimmy Swaggart Ministries, and being an extreme music lover freak, I related to so much of what he wrote about. Swaggarts church and ministry was as legalistic as there ever was. We couldn't listen to ANY secular music, definitely never go to a R rated movie and a catch phrase of the guys at JSBC (Jimmy Swaggart Bible College) was "submit woman". I was even accused of being a Jezebel and lusting after a guy friend for kissing him on the cheek after he fixed my car. There was talk of "Carole's lust problem" and it all came to a head with a huge meeting of friends concerned with my lusting after this friend even though NOTHING could have been further from the truth. There were two friends who saw through all the stupid fear induced drama, Karen and Wade. Wade defended me like a good lawyer at "the meeting". Another friend, Jimmy Clyde, didn't care if I lusted or not he just kept saying "this is stupid" and rolled his eyes a lot during "the meeting". But seven others told me how they really thought I was lusting or at least needed to be more appropriate and not kiss a 16 year old guy on the cheek for fixing my car. We eventually all recovered and lived to look back and laugh at our extreme fear, witch hunting and immaturity but at the time it was very traumatizing to be told you had a "lust problem" just because you kissed a guy on the cheek. ( I can't wait to write this chapter of my life story, there are so many "fun" stories such as this :-)

Anyways, all that to say, yea, I loved this book. I related to it. The legalism, the fundamentalism and the music. I laughed MANY times, said AMEN! many times, said OUCH several times and cried twice. THAT is the makings a great book if you ask me.

You should get it and read it.

Here are some quotes I highlighted;

"people talking about how to create something "real" and "authentic" rather then just being real and authentic. " ouch!

"After a good chiding, which included quoting Jesus, Mother Theresa, and Mr. Rogers, she eventually diagnosed me with faith-based narcissism...The manner in which you integrate your model of Christianity into conversations and other people's realities reveal and unhealthy necessity for dominance and self-gratification. You become eccentric and often passively aggressive.." I was like this for a very long time and I know WAY to many people who are like this even to this day!

..but the word 'acoustic' I understood; it was Christian for 'boring"

"they feed off of other people's attention. Like television evangelist" Refer to the fourth paragraph of this review if you wonder why I liked this quote and can't stomach televangelist.

"The odd thing about Christians pursuing fame is that they do it while pretending not to be interested in fame." Another ouch!

Karen said…
I remember the lust problem. I remember a lot of things. Honestly, it was so cult like. Thank God we are out of all that.
3/01/2010

JC said…
gee, who didn't have a lust problem at our ages.

Unknown said…
Glad I wasn't there to witness that one. But so classic a description of the craziness. I have a couple of those stories too. I must say that I love seeing the positive way you channel all of that old stuff into living your faith so fully these days!! I enjoy and am encouraged by your writings and look forward to your book... sounds like it will be a great read.
3/09/2010