A year ago today.. ..Abel was in a Care Center in Addis Ababu Ethiopia and his grandmother had appeared in Court before a judge and stated what she had said in a statement a year and a half earlier, that she could no longer take care of Abel and was putting him up for adoption. She was relinquishing her parental rights. The judge stamped it approved and we received the call that we were now officially Abel's parents. After 11 months of waiting.

Since she was in Addis for the court date (she had to be flown there from Mekelle, where Abel had lived) she went to see Abel at the Care Center. When he first saw his grandmother walk in, he didn't recognize her, he said she looked different. But then he ran to her, hugged her, and asked her if she was there to take him back home. She told him no.

According to Abel all he was ever told by her when she dropped him off at the orphanage when he was 5 years old, in Mekelle was, "You stay here". Then, he was in care for 18 months before he saw her again that day at the Care Center in Addis. She once again told him to "stay here" while she went home to his cousins and uncle.

Abel also tells us that the Care givers never told him he was getting a new family. They told him he would go with some people, then when he grew up, he would come back to his family. He told me that when they gave him the photo album of us and gifts from us, he thought we were just people sending him stuff. No one ever told him that we would become his family.

I asked him what the other kids in the care center thought and he said they all thought the same thing. That they were coming to a new place to go to school but then one day they would come back home to their families.

He was never told that his mom and dad were dead. He always thought his grandmother was his mom. We had THAT very hard conversation the other day when he asked why he couldn't go back to Ethiopia now. He really thought he could just go back if he didn't want to be here. He cried. I told him to draw pictures of what he thinks his mom and dad may have looked like. And to draw pictures of his grandmother.

He told me he thinks his grandmother gave him up for adoption because his Pappa (who we think was his Uncle because the court papers have no grandfather listed as living) used to beat him every day. He tells me that he was spanked everyday, hard, for a long time.

I do and I don't understand why the care givers in Ethiopia didn't tell him he was going to be in a new family. Maybe they didn't know. Maybe they didn't understand adoption. But didn't they know that the grandmother had taken him to an orphanage because she could no longer take care of him? He said they all told them that they would come back and be reunited with their families. Well, his grandmother probably wont be alive when he is grown and I have only limited information on where the rest of the family is.

Yea, this is hard to navigate. Very hard. I can not even imagine his grief. The rejection, the fear, the confusion! I did the best I could to explain, I have no idea if I did it right. But I prayed and continue to pray for the wisdom to do this right and work through all these peaks on our journey. God's grace and wisdom can get us through these times better, stronger and healthier.

We also found out yesterday after a school hearing test and a hearing test at the ENT, that he has hearing loss in his right ear. They are not sure why so he will have an MRI next week to see.

No matter what, I would not trade one second of this journey. Not one. 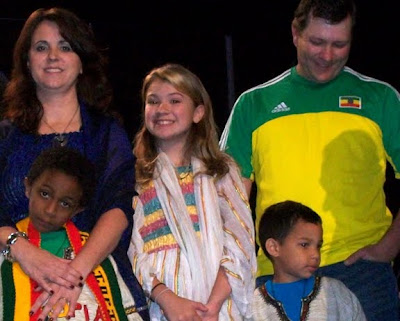 Picture from when we dedicated him at church. We were all in our Ethiopia dress. 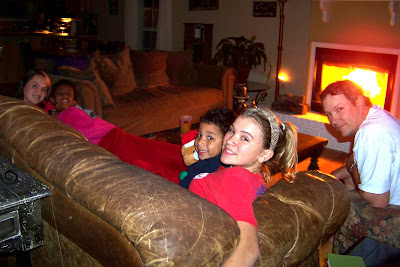 The family by the fire place a few weeks ago. He is loved. 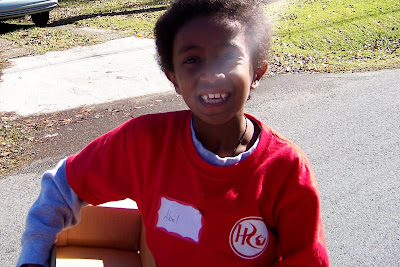 My happy boy passing out free Chocolate and inviting people the the free toy giveaway at church.

He has a good life.

Because he has come into our family we all have a better life.
Adoption Africa family Finger Nail Droppings

Donna Frank said…
It was a long eleven months, but your boy was well worth the wait. I cannot imagine a better family for Abel to grow up in. Congratulations on your 1 year anniversary.
12/10/2009

the tjeps said…
Ditto to all of the above. We are having very similar conversations over here. Ruby was told that she was coming to America to get money to bring back to the care center and her birth mom. It is very hard to sit and listen to your child tell you about continuous abuse from their life in Ethiopia. I often wonder what I was doing at that very moment a world away - not knowing she was yet my daughter - probably sipping on some $4 coffee shopping for something I didn't need. It is a complex thing to think about. It is hard. It is part of who they are, but only a sliver of 'their story'. We have so much to learn from these little ones. We are so blessed to see the world through their eyes.
12/10/2009