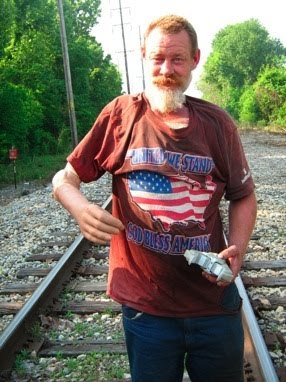 Over two years ago the No Place Outreach team met Richard. He lived in the woods by the railroad tracks, sometimes, or on the Levee. He only has one arm. He was someone that the No Place Outreach team reached out to regularly. Dr. Sheri, who is over the HPC Mobile Medical Unit, helped Frank and Vince, who lead the No Place Outreach, get an electric arm for Richard. He was very grateful. But after that he went from flop house to flop house, had people after him for stealing and he lost his electric arm. He wouldn't accept invitations to church. Alcohol and drugs ruled Richards life. But the No Place Team keep reaching out to him, inviting him to church, telling him about Jesus, loving him, feeding him, giving him what he needed physically when they could. Then seven months ago, he dropped out of sight. No one knew where Richard was. Many believed he was on the run, maybe in jail or even worse. So they prayed for him..where ever he was.

Then a couple months ago, one Saturday night, he called Frank and asked if he would pick him up for church the next day. He was no longer homeless and he was clean.

This is how Richard looks now. That's him at church this last Sunday. I honestly didn't even recognize him the first time he came. He looks so completely different. 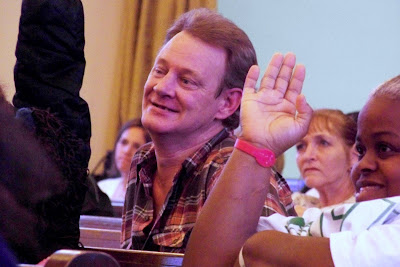 There are many seeds sown that look to have fallen on hard ground, swallowed up by weeds or eaten by birds. We don't get to decide the outcome, but we are called to be planters, the hands of Jesus spreading seeds of love, hope and mercy. The feet of Jesus walking by the railroad track to a camp in the woods. Giving out grits and eggs, some prayer, hygiene items, blankets, coats and work boots...and sometimes we get to watch the seed grow.

God is Good.
HPC Matthew 25 No Place Outreach The Church

Carey said…
"Jesus paid much too high a price, for us to pick and choose who should come...we are the body of Christ."

Anonymous said…
That is so amazing! I seen him awhile back at a convenient store, he was buying alcohol. I always pray for those that suffer from addiction because it is very hard to overcome. I fought it for years before I finally gave it all to God. He looks so different & there is a light in his eyes that come only from being free through Jesus Christ. Thank you for sharing this story.
11/17/2009

Unknown said…
What an amazing story and a great reminder that God's timeline is his and not ours and he has a plan for ALL of us. Thank you so much for sharing.
11/17/2009