September 04, 2009
I remember being at a gas station in Houston Texas. An older man who was very feminie was in there with a much younger boy. The boy also was very girlish, he looked high and his eyes seemed empty. He followed the older man around getting snacks that the older man pointed too.

I thought "wow, the young guy looks like he could be his kid but something tells me it's a sexual relationship. The way the older man is touching the younger boy."

Watching them gave me a sick feeling.

A few years back I was at the gas station right beside the old Coca Cola plant on Airline highway. I was paying for gas. It was around 2 in the afternoon. A man that was at least 60 years old was in line ahead of me. He bought two condoms. He walked out to his car where a large transvestite "woman" was sitting in the passenger seat. He/she looked to be about 16 years old. They drove to the motel next to the gas station.

And then there is Laura. She died a few months back of AIDS. She was an alcoholic and a prostitute. Laura's name on the streets had been "Trix". She had lost several older kids to the state because of her life on the street but managed to keep her youngest daughter, Trina. Laura and Trina lived with a much older man that neither one was related too.

We first met Trina when she was 8. There had been a rumor that Laura was prostituting Trina out in the neighborhood.

If you saw Laura, Trina, the young feminine boy, or the transvestite sitting in the passenger side of the car waiting for his john, how would you think of them?

They are all victims of the sex trafficking industry. ALL of them. A boy is taken, molested for years, accepts his life as a gay person and becomes the sex slave to an old man. An 8 year old girl is given by her mother to a man down the street in exchange for Crack, then she comes home to a "daddy" who gives her food, clothing and shelter in exchange for sex.

THIS is reality. We must start to see the victims of the sex industry for what they are. Daughters, brothers, sisters, mothers, they need to be rescued, restored not shunned and looked down on.

The huge Human Trafficking awareness campaign that has emerged recently needs to lead to more then Hollywood movies like Taken . It needs to be looked long and hard at by the church. We have the information, we have no excuse, we must act.

The first step is changing the way we look at these people. Over the last three years God has changed my eyes. I see a lady walking down Airline Highway in the heavy prostitution area, I get out and tell her about the BRDC Cafe, a place where she can get clothes, food, access to a shelter and a way out of that life style. I also hand her a card that has a Human trafficking hot line number on it and information about the Dream Center. I tell her we can help her and want to help her. Even if she NEVER takes the help offered to her. THAT does not negate my responsibility to her.

I dare not ever drive by and think she's just a prostitute EVER again...please don't you.

38,600 – Estimated number of an approximate 1.6 million runaway/thrown away youth at risk of sexual endangerment or exploitation in 1999.

12-14 – Average age of entry into prostitution. 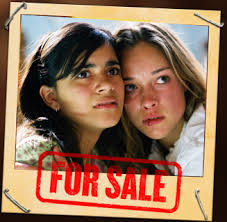 The Maggio Family said…
actually makes me sick to my stomach.

met a 30 yr old girl today at brdc that was a former prostitute.... wrecks your world, having that type of conversation
9/04/2009

Jill said…
Thanks so much for sharing these stories. Everything you are saying is so true. Thanks for being open and sharing God's heart.

The Lady with the Dragon Tattoo said…
Such a good post. Here in my section of the DR human trafficking is everywhere and it is just as prevalent with the men as it is with the women. The situtation is so sad because many of them are in it because they can not do any better. The education system is so horrible here and much of the population is undeducated. Some can't read or write. Some barely speak Spanish. All need something more, hope.
9/04/2009

Anonymous said…
I'm glad you do something instead of just complaining or linking.

Keep up the good fight.

Paula S said…
This breaks my heart. We always think that human trafficking is only going on in third-world countries and for the most part turn our backs on that. But you're right, we need to open our eyes and understand that it's going on here (right under our noses) as well. It's a heartbreaking situation (especially when children are involved).
9/05/2009