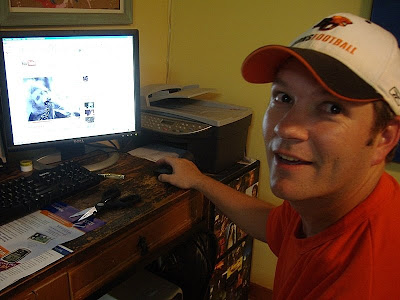 This is Dean watching hair band video's on YouTube. In the car, he sings hair band songs, last Christmas I bought him a Motley Crue greatest hits and he owns all the "Every bad guy has a soft side" Hair band ballads CD that you see advertised on TV. When we renewed our wedding vows at 10 years, I quoted Bon Jovi's "Living on a Prayer" to him. He likes Poison, which, by even hair band standards, was the worse of them all and he likes a hair band called Tesla, yea, no one else has heard of them either but him and my brother LOVED Tesla. Dean even liked Stryper's song Honestly, which is freakishly bad.

When hair bands were at their height of fame I was in "I can't listen to secular music or I will go to hell" bondage so I didn't even listen to the radio much. But now, I think that bondage saved me from the likes of Poison, Warent and Cinderella. Wow, even their names ring of big frizzy hair, Aquanet and really tight rib-high spandex!

But the hottest guy on the planet, my husband, really digs hair bands. He used to have a really long frizzy mullet even, I think he dreams of being a hair band rocker.


This is for Dean and me actually, Ratt is one of the few hair bands I kinda liked. At least, I like this song and Round and Round. I guess after 14 years of marriage, he's rubbed off on me some.

SO, you HAVE to be a rocker, from any time in history, who would you be?

PROPS: The idea for this post came from Los who posted about naming bands and Tweezy for mentioning Stryper in a Twit.

Anonymous said…
Hahaha. I went through a hair band phase in early high school. My first actual concert experience was Def Leppard... absolutely incredible. SO much fun. :) I still love Van Halen. Dad dug Tesla a tiny bit. But I rock out to "Ice Cream Man" quite often.

Anonymous said…
Anne and Nancy Wilson were awesome. You know I had a serious thing for Dave Lee. I was like you during the hairband hayday. So I never really got to know them. I like Bon Jovi's It's My Life. We used to listen to a lot of AC/DC. Van Halen, Journey, Led Zepplin, Boston. I threw away all my tapes when I got saved. I don't really regret that, because at the time, I needed to make a new start and a separation. I can listen now on different terms.
7/03/2008

Anonymous said…
wow! Chris has said his favorite band was Tesla. I had never heard of them. I thought that was maybe the one crazy thing about him. I guess I was wrong.
7/03/2008

I have heard of Tesla and I even went to Motley Crue concert in New Orleans with a boyfriend when I was in the 11th grade. He was into them, and I sat around judging everyone there! LOL

I don't listen to secular music at all anymore...and not because I think I'll go to Hell because of it but just because I prefer not to.