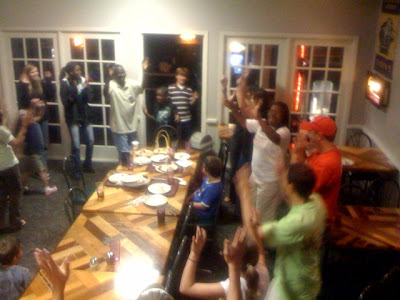 This is a picture from Friday night at Mr. Gatti's pizza place. We went to dinner there with some friends, the Ohlerkings, Jearreau's, Frank and Vince and The Changara family. The Changara's are a visiting pastor and his family from Zimbabwe Africa. They have a church there, with a Children's Cup Care point.

Yes, you are seeing correctly, we ARE dancing in the picture. See Dean in the red shirt and hat? I am down further from him in black but you can hardly see me. The guy by the french door in the cream colored shirt and jeans, he is Pastor Dixion Changara (his son and daughter are on either side of him and his wife is in white by Dean) he is leading us and we are all singing and DANCING THE STEPS TOO THIS SONG,

It was a great evening, almost all we talked about was Africa and A.

Thank you Vicki for bringing a bunch of Africa minded American people together with people from Africa! Seeds were planted, some exisiting seeds were watered and I know God is doing something great. Thank you.

How perfect is it that we ended the night serenading all the Mr. Gatti's patrons with an African praise song?
Adoption Africa