The blessing is in the giving 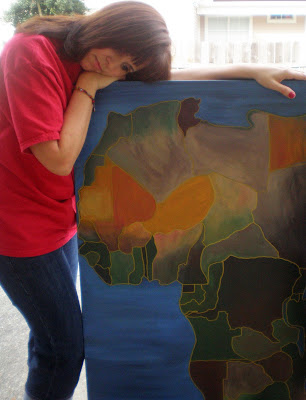 Back when I painted this Africa painting, I knew it wasn't mine. That small voice kept saying "this is not for you". I even considered a few times giving it to different people but every time I just had that little check that says "that's not it". So time went by, I hung it in my kitchen and really got used to looking at it. I became attached to it. I mean why not, it went perfectly with my kitchen decor, and now I was adopting from Africa, how perfect to have a painting of Africa in our home?

About a month ago full time Elevate started accepting art donations for an Art auction to raise money for their full time Elevate missions trips. As soon as I saw it I heard in my head "you should donate your Africa picture" then I audibly heard it when Summer actually told me. I responded to both with, "No, If I sold it I'd do it for Dean's trip to Africa". After that the crazy talk in my head about letting other people have my Africa painting to raise money stopped...

But not for long.

Last Wednesday I was getting ready to go to the Dream Center, I heard what I had been hearing a lot over the last month, "you need to donate that painting to the Full time Elevate Fund raiser", I responded with "that's the devil" and then I heard "yea, sure it's the devil cuz' he's real into making us help others and give to worthy causes". Yes, the holy spirit was being sarcastic with me. I knew it, I knew I was supposed to donate it but I was so worried about raising the money for Dean and for other stuff that it's really crunch time on so I blew it off again.

Thursday night, Choir practice, Delynn is doing the devotional, yea, you guessed it, she tells a story of how God told her to give her absolute favorite purse to a lady she had just met in a nail salon in New Orleans. Her story was so similar to my situation I actually laughed out load at a very inappropriate time. It was like God was telling me flat out that giving it was the right thing to do. Delynn's story showed how blessing people ALWAYS reaps Gods plan. The lady she gave the purse to E-mailed her and said she was going to come to church here in BR from New Orleans. God used that giving of the purse to touch that ladies heart.

So, yesterday morning we said good bye to Africa, I took it to Tiffany for the full time Elevate Art sell (it's Monday night before Chick night) and I had no doubt God was in the giving.

today, Dean calls me and tells me that Dino came into the concession stand today and told Dean that he had checks sent directly to him that were for Dean's trip. He asked Dean how much more he had left to raise, Dean said "$1000.00, Dino told him, oh yea, you got that!"

HerstoryGirl said…
That's awesome!
Do you mean that Dean has already raised ALL of his mission trip funds?

Does that mean Evangeline gets to bathe now???
Her hair looks so cute in corn rows; I love it!

Carole Turner said…
She still can't bathe because a lot of the money is coming from people that sponsered her NOT to bath. So, she bathes on April 16th, May 16th then goes back to bathing June 20th I think that's the dates.