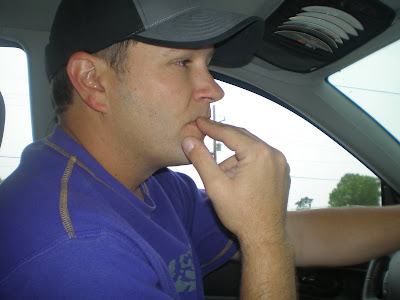 We are two months into this adoption, we came into it with a home study that ONLY needed to be updated which meant getting new police reports from the state and updated medical reports.

The kids and I got ours really quick, all the Medical reports are is a form that says you are free from communicable diseases and expected to live a normal life expectancy.

Dean's on the other hand has been a completely surreal nightmare!!!

First I call the Dr. he saw when we were trying to adopt Bradshaw two years ago, no answer, I leave a message. Then call again, get a "Hello".

I ask for the Dr. and am told he is not practicing anymore.

ok, Dean then gives me a card of a Dr. someone at his work uses,

I call that doctor, get a machine, leave a message, never get called back. Call again the next day, no call back, call again, finally the lady says he's not taking new clients!!

Finally I get a Dr.'s name from a friend of mine. By this time I am so frustrated but now hopeful because this is a doctor everyone at church uses so I am feeling like we might finally get this form signed.

I call her office, get an appointment with another doctor in her practice because he can see Dean the next day.

Dean goes in the next day, they don't have his appointment in the schedule. They make him wait and HOUR then when he tells them he has to go because he is at work, they reschedule him for the next day .

He goes back, finally sees a doctor.....

Dr examines Dean, hears something in his chest, X-rays, shadow or something on his lungs, fluid in his ears, round of antibiotics, Claritin, Dr says," come back in three weeks!!!"

Completely in disbelief by now. Over a month has passed. We needed that paper YESTERDAY and the doctor wont sign it cuz' Dean has a COLD!!!!

SO thanks to Summer and Clay, Dean gets in to see a Pulmonologist the next day.

Yea, we are gonna get to the bottom of this "shadow" or whatever on his lungs right now!

Pulmonologist looks at the x-rays and says it's nothing, calls the other Dr. tells them Dean is all clear and that the Dr. should sign the form.

another week has gone by. I call everyday asking about the form, Pulmonologist was out of town for Easter..

Today Dean had another apt with the Dr.

We were hopeful that since he has been on antibiotics and Claritin that today he would get the paper signed finally.

They called and had to reschedule..the Dr. is sick today!!!!!

Seriously, I can't stinkin believe this!!

PLEASE PRAY THAT WE WILL FINALLY GET THIS FORM SIGNED TOMORROW.

Lesley said…
Crazy, absolutely crazy!! I'm praying that the paper signed tomorrow and that the rest of this journey that y'all are on goes smoothly and quickly!!!

Anonymous said…
Carole,
I TRULY know what you are going through. Think of it as labor pains!
Melissa
3/25/2008

HerstoryGirl said…
Ok, Carole: You can't tell me that you were not convicted by Michelle's lecture tonight... All I could think of (besides MY OWN "waiting rooms") was that there must be SOME REASON -- unknown to us -- that this is being delayed for you.
God's got it under control; it will happen in good time. I know you are frustrated (and probably don't want to hear that), but don't despair.
Love ya, girl!
Summer
3/25/2008