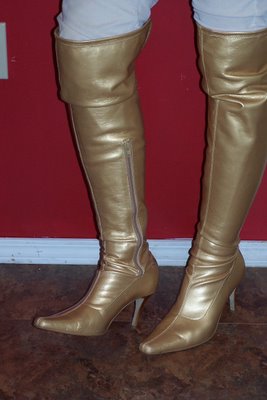 Thanksgiving 2004, we were with Karen's family at her sister Kandi's house. The feast was over, kids were outside playing, men were laying on all available soft surfaces watching football and all us ladies were sitting around the table looking at fashion magazines and talking. We got on the subject of Karen's niece and sisters fabulous shoes. They said they had gotten them at "Shoe Heaven" on Plank Rd. Kandie suggested we call and see if they were open because it was owned by Arabs. We called and it was indeed open! All us chicks jumped in the Harvey mobile (a 15 passenger van) and headed to Plank Road. (For those who don't know Baton Rouge, Plank Road is, how should I say this, well a road where you would not at all be surprised to see those boots on a lady on a corner.)

When I first entered Shoe Time (it's not named Shoe Heaven, that is just what Karen's sister and niece called it) I was quite overwhelmed by the size of the place. It was a vast space full of isle after isle of shoes. No decorations, this wasn't about looking pretty, this store was all about selling shoes, and selling them cheap. The most expensive shoes in there were $19.00. Most were $12.00 or under. So we started the hunt. I picked up several spiked heel tennis shoes, red stilettos with fringe and some transparent platforms with a flower in them but I just wasn't feeling it.

I had left the group and was just kinda wondering around the store, I had decided I wasn't gonna find anything. I was in the back and I turned a corner to head up to the front of the store where Karen and her sisters where when I realized I had entered the boot area of the store. From the corner of my eye I saw them, laying sprawled out on the top shelf right between a pair of red, silver studded thigh highs and a pair of black biker with chains thigh highs were MY gold lame' thigh high boots!! I snickered to myself as I quietly pulled them on, tucked my black washed gap jeans tightly into the legs and pulled those bad boys on up as far as they would go. I walked casually to find Karen. They were all looking down, trying on shoes;

They looked up, and came face to face with Gold Lame'!

They all burst out laughing, saying "oh my gosh, what in the world?! Those are great!! I'll pay for them if you will wear them!"

Kaylynn (Karen's older sister) said "You will keep them on and wear them back to the house?"

When we got back to the house all the men were asleep, I walked in, sat down in a chair and started reading a magazine. Not long after that Dean looked up at me and with out missing a beat said,

And the rest as they say, is history.
Finger Nail Droppings foot wear Holiday/vacation Humorous History

Anonymous said…
I am SOOO lovin that story and those boots - just ask Wade - they are sooo me!!! hee hee
PS - one of these days, I'll send u the pics of ur beautiful children I took - thanx sooooo much for ur hospitality this past Sept.!! Have a wonderful Christmas!
Stacey (Wade's sis-in-law)
12/19/2005