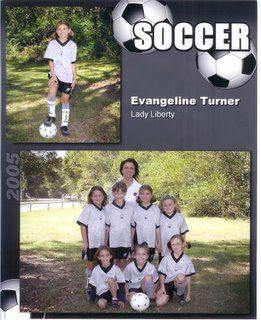 Soccer season is over and Basketball is about to begin. Yes, Dean and I both are coaching Basketball! I got bit by the bug and now I'm just out of control!!

I have to say, coaching Soccer was an incredible experience. I had felt compelled to do it for the last three years, I always found a reason not too. But then this year I listened to the God planted Nike commercial in my head saying "just do it" and I did.

I went into it thinking I was sacrificing and would just have to suck it up and do something I would not enjoy for the sake of my daughter and sports loving husband but came out of it loving the girls, the game and the whole Upward Soccer experience. See what happened was, when I died to self, gave into what I knew God wanted me to do, He gave me great pleasure in what I thought I would not like at all. What a great God He is! He took the gifts I had and used them in an environment I thought they couldn't be used in.

Since I was working with girls I often times used very girly girl examples to convey soccer fundementals. Like how we try to teach them to look forward not down at the ball while they are kicking it down the field, I told them it's like being a runway model, head up strutting your stuff, not looking down, you don't want to fall off the edge of a catwalk and you don't want to run into an oponent coming at you to steal your soccer ball.

At the start of the season I asked every girl to tell me a nick name they wanted to be called by, of course they could only be positive, encouraging names and I told them I was coach "FeatherIron". So we used the names they picked all season, Cutie Pie, Meagoon, StarFire, Little E, Cole' bug, Anna-bananna, Kelli, and Bree-Bree. What was really cool is our team name was "Lady Liberty" too, we all dug the name!

Starting off all but two of the girls had never even played soccer before so needless to say, we weren't that good but it was amazing how these girls progressed! Coach Bull dog, (Tony Gardana, he was the soccer "skills" coach for the team, I couldn't have done it without him that is for sure) got them in shape, he's hard core fundemental skills guy and they learned so much from him. By the end of the season we had other coaches tell us how much improvement they saw in our team, I was so proud of them all.

The most humbling experience for me though had to be Awards Night. I participated in a skit and I was the only one who was totally over the top! I had on a big wig, lots of make up, and everyone else was dressed normal! While I was standing back stage waiting to go on, I had to snicker at how He keeps us humble while reviving gifts we had long since put aside.

So, I have to say, I think I learned more about Gods grace and love this soccer season then the girls I was supposed to be conveying that too. From devotions at practice to trying to be Christ like on the soccer field, I was challenged and proded by the Lord on a regular basis. Being a coach holds a great responsibility to be an example and I am humbled and honored to have done in under the Upwards Soccer program.
Finger Nail Droppings My issues

Anonymous said…
While coach "Featheriron" was the only one dressed over the top for the skit, she has to know that I have personally recieved so many compliments about her character, and how well she did.

And while I wanted to be over the top, finding an adult school uniform that would make my white, chubby legs look thinner and hide the hideous ankle brace that I donned as a result of an injury, non could be found! So resulted to makeing a complete fool out of myself so she wouldn't be all alone! Great job Hilda : )
11/10/2005